The elected president of Nigeria is Muhammadu Buhari but there is a power behind the throne that many Nigerians are not even aware of. This person is so powerful and influential that he is said to have the closest ear of the president, more than ANYONE else. His name is Mamman Daura. The two men are related by blood: President Buhari is Mamman Daura’s uncle although Daura is two and half years older than the president. The nephew-uncle relationship is described as extremely close and date back to childhood years. Now that Buhari is in power as the Commander-in-Chief of the Armed Forces, the relationship is said to have even taken another dimension entirely with Daura wielding near-absolute power and authority.

Gen.Buhari and Mallam Mamman Daura taking a stroll on the streets of London.
When Buhari overthrew Shagari in 1983, Daura was one of the few people Buhari trusted enough to give principal advisory roles. By the late 1980s, he had succeeded Ibrahim Dasuki as the head of the African International Bank. He later also served as chairman of the board of the Nigerian Television Authority (NTA) and if there is anyone who Buhari always listened to and confided in over the years, it is Mamman Daura but many are now complaining bitterly that the relationship is getting too close for comfort and will negatively affect all the policies of the Buhari administration which is already struggling to cope with economic and security challenges. In the photos below, when Katsina APC delegates went to pay Buhari courtesy visit as President-Elect, Daura was visibly by his side. He has never left, see photos below:

Daura is to the left and he is the one in spectacles. President Buhari here was exchanging pleasantries with former Katsina State governor, Alhaji Saidu Barda. 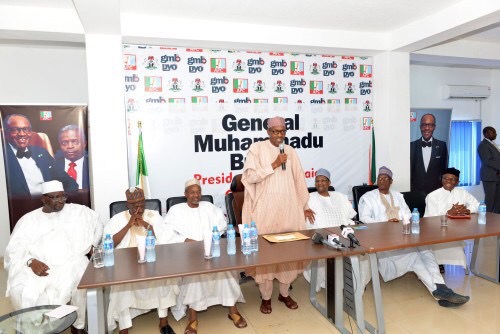 KATSINA DELEGATES VISIT PRESIDENT ELECT GEN BUHARI 0. R-L; President Elect Gen Muhammadu Buhari, Alhaji Mamman Daura exechange greeting with APC Chairman Katsina State, Engr Mustapha Muhammad Inuwa when KATSINA Delegation paid a congratulatory visit on his victory held at the APC campaign office in Abuja. Saturday APR 4 2015
An industrialist and later editor and managing director of New Nigeria newspaper (one of the most influential publications in Nigeria at a point), Mamman Daura has been described as ‘intensely engaging, extremely intelligent and brilliant‘. However, not everyone agree with that description. Reliable sources within the Aso Rock Presidential Villa are raising an alarm that there is a dangerous power tussle within the camps of support around the president. They claim Daura has cornered everything and has blocked access to the president. Even some of the most loyal supporters of the president and some of the president’s family members are very bitter as to how Daura cut off everyone else from the president.
Daura lives in the Aso Rock Presidential Villa and whenever he is off to his Kaduna residence, he is said to have access to the jets of the Nigerian Presidential Air Fleet and make use of them as he so desires. Daura is said to have more access to the presidential fleet than many elected officials in government and even the wife of the President, he is that close and influential to the president. He seems to have been given a free hand to operate as he likes and determine who gets what as far as the presidency is concerned. The education minister reportedly got the appointment because of Daura’s approval and nomination. His security network both in Abuja and Kaduna are said to rival that of the president himself with his Kaduna residence guarded round the clock by a detachment of heavily-armed soldiers. His convoy is also said to be nothing but presidential.
While revealing to our field correspondents, aides and close advisers of the president accuse Daura of cornering all the appointments, contracts, deals and even collecting millions from people before allowing them have access to the president or get any appointment approved. They say that many appointments in Buhari’s cabinet were heavily influenced by Daura. They went to further explain that if you are not in Daura’s good books, you can as well forget seeing the president or even getting any appointment or approval from the presidential villa. Many insiders who pleaded anonymity due to the sensitive nature of the matter and would not want to be found in the direct path of Mr. President are gravely worried that Daura has walled off the president from good and diverse advice and fear that it is a matter of time before the adverse effects will start manifesting to all Nigerians.