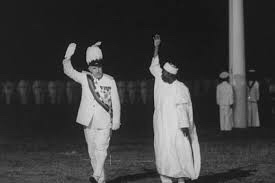 On Monday, 30 July, 2007, the British Broadcasting Corporation (BBC) ran a documentary titled: ‘The Gift of Democracy?’ The 27-and-a-half minute documentary tells how Nigeria was rigged at the very beginning. It explains how the British shut out a section of Nigeria and wilfully handed Nigeria over to mediocrity.

The revelation is an apt explanation for the failure of Nigeria and the events of the last few weeks which have further confused hopeful Nigerians. Defections, altercations, vacations, elections.

Nigeria is a rigged country. We don’t choose idiots as family heads; we don’t hand over our companies to imbeciles but we choose this stock as minders of Nigeria. We grew up to know the country as one with knock-knees. And we are told that an ass with knock-knee will never become a royal steed. We also know that a knock-kneed man cannot have a balanced load on his head. Why is Nigeria perpetually unwell? The Yoruba insist you should not ask questions of the bent load and the head, look at the base, the beginning.

The BBC documentary speaks about two mysterious files on Nigeria and the politics of the elections leading to Nigeria’s independence in 1960. The two top secret files, it says, are being kept securely closed for 100 years. Anyone who wants the content should try and stay alive till 2060. Not even requests for them through Freedom of Information Act have succeeded in getting the files opened.

The documentary, essentially, was an investigation into what the BBC said were claims that the British colonial officials helped rig Nigeria’s pre-independence elections to ensure that the country was handed over to the north. “Could it be that Britain taught Nigeria what it knows today about fixing the polls?” the BBC asked. It believes the answer to that question is tucked away in the two mysterious files. Unfortunately, the files will remain locked away still for about 40 more years. The International Committee of the Fourth International (ICFI) did a beautiful review of the documentary in August 2007. Its piece, titled: ‘Britain rigged election before Nigerian Independence’ reads in part:

…One file contains material relating to the Governor-General at the time of independence, Sir James Robertson, and the other material on Dr Nnamdi Azikiwe, known as Zik, who was leader of the nationalist pro-independence political party, the National Council of Nigerian Citizens (NCNC). Mike Thomson, the investigator on the programme, spoke to Harold Smith who had gone out to work as a British Colonial Officer in the 1950s after graduating from Oxford University. Smith was based in the then capital, Lagos, working in the Ministry of Labour, then headed by Festus Okotie-Eboh, a flamboyant politician who was treasurer of the NCNC. The NCNC was based in the Eastern Region of Nigeria. Under colonial rule the country was divided up into three regions, North, East and West. 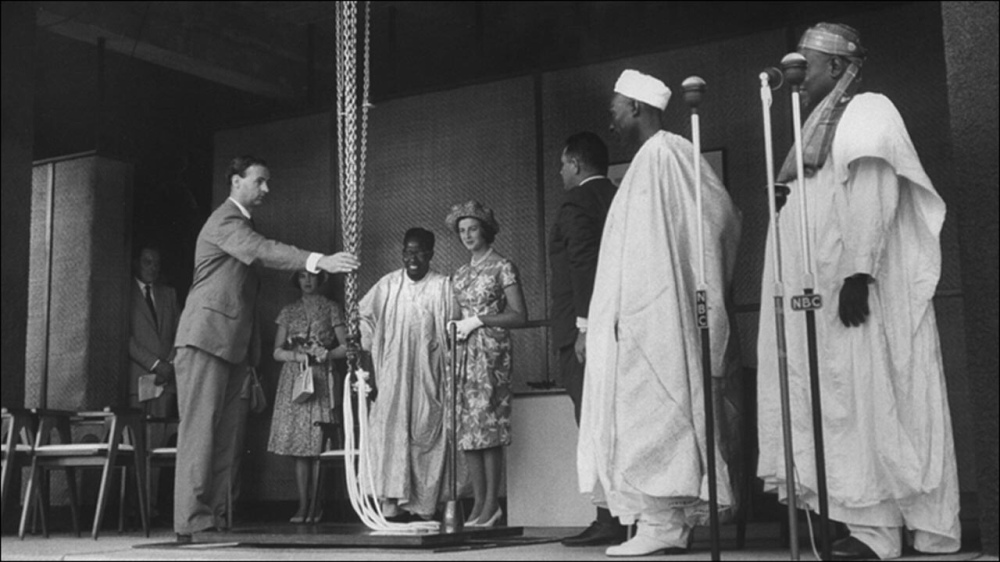 One day Smith was given a secret file containing a minute that ordered him to get involved in regional elections taking place in the late 1950s in the run-up to independence. He was to make vehicles, staff and other resources available to the NCNC colleagues of Okotie-Eboh who was standing in the elections. Smith was shocked at the request. He explained that the election had to be fixed because the plan was that the Northern Region would hold power on independence.

Thomson asks, “Could an allegation of British government involvement to rig an election or at the least to favour a particular party be substantiated?”

He interviewed Professor David Anderson, Director of the African Studies Centre at Oxford University. Asked if such manipulation of an election result could have happened, Professor Anderson replied: “In almost every single colony, the British attempted to manipulate the result to their advantage…. I would be surprised if they had not done so.” Nigeria’s Northern region constituted three quarters of the land mass of the country and had roughly half the population. Professor Anderson explained that the North, with its Islamist culture, was very conservative and had enjoyed a close relationship with its British colonial rulers. The British had ruled through the emirs. The British government was concerned that the result of independence might lead to partition. They regarded the Northern region as a bulwark against opposition. Professor Anderson explained that British analysts at the time thought that West Africa as a whole with its high levels of poverty was highly vulnerable to communism.

The politics of the North was dominated by the Northern Peoples’ Congress Party (NPC). Britain was aware that the NPC would be unable to rule an independent Nigeria by itself and would need the support of a major party in the East or West.This is why, explains Smith, he had been ordered to help the party of Dr Azikiwe (Zik) in the East, the NCNC. He explained: “They had to fix Zik of course, there was stuff they have got him for that could send him to prison … [they] forced him to do a deal with the North.”Smith is adamant the orders to help the NCNC came from the top, the governor-general Sir James Robertson. Smith described Robertson as “a thug and he had a terrible reputation….We loved Africans, but these people who came to do this job were a different breed; these were the ex-SOE [British Secret Service outfit set up during the Second World War] and MI6.”

According to Smith, his colleagues reluctantly went along with the orders to aid the election campaign. Smith refused and asked to see Robertson. He describes his meeting with Robertson. Robertson said, “I want you to know that everything you have alleged about the elections is correct…. You know too much and I want you to know how much trouble you are in. The Colonial Service is just like the army; you know what happens if you disobey orders on active service and that is what is going to happen to you.” Smith added that Robertson was so angry he half expected him to produce a pistol and shoot him. Smith showed Mike Thomson the copies of correspondence he has sent to the “great and the good” over the years in his campaign to highlight his allegations. Thomson remarked that without recordings of the conversations Harold Smith claims took place and no copies of the orders, it is difficult for him to prove his case.

However, Thomson was able to quote from some documents that give a hint of what happened. One document is a letter written by Sir Peter Smethers who was a private parliamentary secretary at the British Colonial Office throughout most of the decolonization period and had been present at most of the independence negotiations, including that of Nigeria.

Smethers died last year at the age of 92.

The other document was from the memoirs of Robertson, who died in 1983. He explained that in the elections that took place in 1959 to choose the government that would rule after independence, before the result was known there were rumours that the NCNC in the East and the Action Group in the West were considering a coalition and would be able to form a majority in the House of Representatives. He explained how he thought this might result in the North leaving the federation. Part of his role was to appoint as prime minister whoever he thought best able to command a majority in the House of Representatives. He invited Abukakar Tafawa Balewa, the northern leader, to form a government even before the result of the election was known. He did so without consulting the secretary of state in the British government.

Thomson also explains how the British carried out a census in Nigeria in the years leading to independence and were accused of overestimating the numbers in the North to give them a higher representation in the parliament. Professor Anderson agrees it was certainly in the interests of Britain to have done that. Both Professor Anderson and Mike Thomson applied under the Freedom of Information Act to gain access to the two files but have been refused. Anderson told the programme: “Clearly, someone in the British government, when those files were classified, did not want us historians to learn something about what they contain, and that raises my suspicions that those files might contain information about whatever deals were brokered between the British government and the NCNC. Because it is certainly the case that the NCNC would not have won the election it did without British support. Nor could it have formed a coalition with the NPC at independence without British support. So, I would love to see what’s in those two files about Sir James Robertson and Dr Azikiwe.” That is the review.

The revelation shows the foundation of Nigeria. Crookedness and base considerations gave it its beginning. And crooked woods can never give peace a chance. Nigeria was not designed to excel. Those who created it moulded it to serve a purpose; only they know that purpose. And they have been the unseen driver of the vehicle. Nigeria presents a peculiar country that works only for those who excel in their ordinariness. That should tell you why those who rule here are the certificated third rate equipped with the means to buy power. And, every election cycle we see the unusual interest from principals and agents. They collude and conspire to limit the choices available. The choices are always limited to the ones the principalities are comfortable with.

So, where are we going? These crooked legs won’t correct themselves. They need surgical realignment to get them straightened. Crooks can’t do that for us. Nigeria needs balancing and restructuring of all that house it. You don’t fix knock knees by using quacks. But that is what Nigeria has seen over the decades. It is its heritage; its bequest at consummation. The best should rule the rest is a cardinal order even in the animal world. And it isn’t that we don’t know what is right. We just won’t do it for Nigeria. But why? At least we carefully choose our cooks, our drivers, the doctors who treat us; mechanics who fix our cars. We don’t accept counterfeit currencies nor do we knowingly take expired drugs. We do due diligence on that boy, that girl, seeking the hand of our child in marriage. But we orphan Nigeria, we feed it poison. Wisdom is the pill Nigeria needs from us. But we did not inherit that wisdom from our masters, the British. Power here, at all levels, goes to the weakest, the unlettered, the unskilled. And so the country is crippled in the hands of deadly fake doctors serially hired to manage our case. The way is to get good hands to uproot the bad destiny which the British planted in the soil here. The way to go is to get re-born, get sense, learn good behaviour and install merit- everywhere.