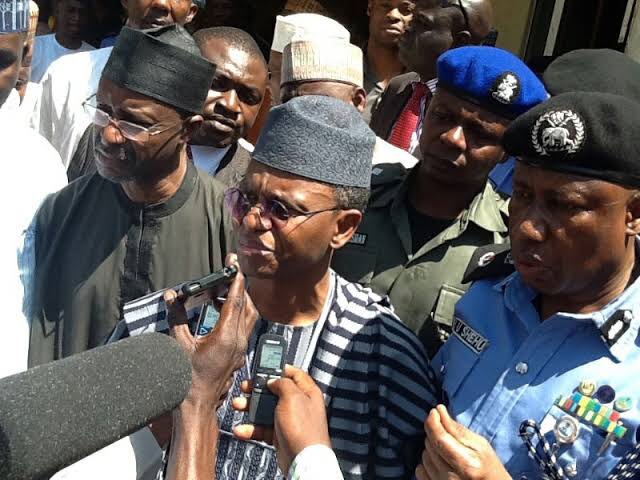 For some personal reasons, I have refrained from commenting on the programmes of the current administration in Kaduna State. However, after careful observation of the ploy to ‘rename’ or ‘change’ the nomenclature’ of traditional institutions in Kaduna State by fiat, I cannot turn a blind eye to the matter given the imminent disaster such a move could bring, now or in the future.

Even though I am NOT a historian by training, providence had afforded me access to a wide range of literature, about the area which is now ‘Nigeria,’ and can emphatically say much about the history of the current population of Kaduna State spanning about 600 years (1400 to date). Consequently, I dare to say that the creation of Chiefdoms or the elevation of Chiefs should follow a verifiable historical social organisation obtained both in oral/written history and archives but not the opinions of politicians.

Accordingly, Kaduna State government’s masked strategy to ”change of nomenclature” for the traditional institutions in the southern part of the state is an act which amounts to a deliberate attempt at ”defacing southern Kaduna people’s identity and in a way a recolonisation project.” Such an act should be condemned by civil societies, minority rights’ advocates and the International Community since the move was against UNESCO’s Charter for the preservation/protection of endangered heritage.

What one expects from the government of the day is to ‘correct’ the names of such Chiefdoms as ‘Jaba’ to read as HAM, ‘Moro’a’ to SHOLIO, ‘Kagoro’ to OEGWOROK, ‘Kaninkon,’ to NIKYOP, ‘Numana’ to ANIMWEN, ‘Koro’ to ASHE & WACI, etc., but not attempting to ‘erase history’ by politicising a cultural and historical matter. Besides, since the state has experts who are versed in history and the social organisation of the demography of its inhabitants, expert advice should guide such a nerve-touching agenda.

Moreover, the current Honourable Commissioner for Local Government Affairs, being a Professor of Political Science, should know better than pretending that the ‘change of nomenclature’ was the right thing to do thereby only postponing the doomsday.

To my mind, in order to avert the current and future crisis, the government should constitute a group of experts/academics, critically minded, and of worthy character, to brainstorm for her and fashion out a workable blueprint by way of a referendum establishing what the people feel regarding traditional institutions. Accordingly, since we claim that democracy was about the people, let the government allow the people define the way they wish to be identified.

For the records, the peopling of the existing geography called ‘Kaduna State,’ before 1908 when Kaduna began attracting the Europeans leading to its growth to a mega city, is made up of three main blocks.

The groups were mainly the Zazzagawa (Hausa) in the north, a few Fulbe (Fulani), who settled in the area in 1800s after Dan-Fodio’s jihad, now in every part of the state in search of grazing lands, and then a conglomerate of 63 ethnic nationalities (by my counting), currently referred to as the ‘Southern Kaduna,’ who share cultural and linguistic affinities and must have lived in their current location for centuries.

Manifestly, while the Hausa and Fulbe (Fulani) groups are distinct groups, gradually merging because of intermarriages propelled by religious affinity from 1804 upwards, the remaining 63 groups had little or no history of cultural and linguistic affinities with the Hausa and Fulbe (Fulani) until the British Colonial project foisted the Sarauta system on them (1903 to date).

The preceding point reveals that the 3 blocks had nothing in common regarding the social organisation of their people. For instance, while the Fulbe were, strictly speaking, nomads, the Hausa of Zazzau lived in an organised feudal state, and the people in the south lived under a consolidated council of elders’ led by a Chief Priest (Kpop Ku/Agwam Obwai, in Hyam & Jju, for instance), what the traditional Chiefs of Southern Kaduna have come to replace.

Consequently, the people in the south, ”Southern Zaria” in colonial records, practised a theocratic system, where the Chief Priest (Agwam Obwai/Kpop Ku) was a religious and civil leader advised by a council of elders who represent clans/moieties. Due to their peculiar structure, for one to be allowed into a shrine, say in Kajju, one needed to hail from Kajju, that is, one must be Bajju by origin or one with proven affiliation to the group.

The above-illustrated set up was widespread in the locality of contemporary Southern Kaduna and must have been so in almost, if not, all the groups. The point is that the non-Hausa groups of Kaduna State derive a sense of belonging from an ethnic affinity and not a place of settlement. That is to say that for one to be recognised as Ham, Bajju, Gwong, Atyap, Akurmi, Kuvori, Adara, Bekulu, Gbagyi, Agbiri, Abin, Ninzo, Animwen, etc, one needed a proven ancestral link to the said ethnic group.

By implication, even if one had lived in an area for donkey years, such couldn’t be considered a member of the ethnic group but a neighbour, except by public declaration or a willingness to be absorbed into the groups. Little wonder, the Fulani and Hausa groups of Jamma’a Daroro (1810 circa), despite being in ‘southern Zaria’ for 208 years now, retain their Fulbe and Hausa identity with little or no interference from the host communities.

For the purpose of illustrating the points raised so far, if the Government insists on changing the title of, say, the Kpop Ham to ‘Kpop Kwain’ (Kpop of Kwoi), the colossal damage would be that other Ham people outside of Kwain (Kwoi) would have every right not to consider ‘Kpop Kwain’ as their Chief, an act which could shrink the domain of the current Kpop. The fact is that while every Ham person is believed to be related by descent, they do have boundaries of settlements which are taken into account in almost every aspect of their sociopolitical and cultural lives.

The import of the above illustration is that while it is possible for a person of Hausa origin to think of themselves as Ba-Zazzagi, Ba-Kane, Ba-Katsine, Ba-Gobiri, Birame, Ba-Rane, and Dan-Daura (identity derived from names of old Hausa States), the non-Hausa people acquire their link through the lineages of their forebears.

Therefore, a non-Hausa person is first a member of their ethnic group, before the town/settlement they hail from. Consequently, a Gbagyi who is not from Chikun LGA does not have a strong affiliation to an ”Esu of Chikun” as the government of the day would have the Gbagyi of Kaduna to think. The same is the issue with ‘Agom Kachia.’

For the records, the Adara have a population in Kachia, Kajuru, Chikun, Kagarko LGAs and in parts of Niger State. Now, how then does the government want the Adara outside of ‘Kachia’ to hold allegiance to an Agom named after a town? The way things are is faultless as an Agom Adara represents not just the Adara in Kachia but everyone with Adara ancestry, even those in the diaspora, hence, Agom Adara is a unification strand for tradition, culture, and history. Same for Sa Gbagyi for the Gbagyi of Kaduna State.

Nonetheless, should the government insists on ‘changing’ the nomenclature of traditional institutions, the all-important questions which would beg for urgent and honest answers should be:

i. Is Kaduna State government ready to give every township/settlement a traditional Chief of equal status with the existing ones or how is the structure going to be?

ii. What is the long-term goal of ”changing” the nomenclature of Chiefdoms and adjusting ethnic/traditional domains?

ii. Isn’t the government attempting to deface and recolonise the identified 63 ethnic groups in the other parts of the state coercing them to abandon their ancestral pattern of the organisation by adopting the Dan-Fodio’s established structure by fiat?

My candid opinion is that, for the indisputable facts of history and self-worth, the Government of Kaduna State should revisit the idea of renaming traditionally based institutions for it is through the existing structure that they derive legitimacy. The undeniable fact is that a leopard may appear as a cat but the two are different but such a ‘difference’ adds colour to life.

Without mincing words, the social organisation of the Hausa, which the Fulbe Caliphate is now identified with, differs from that of the other ethnic groups, hence, naming Chiefs after towns won’t work in the south of the state, however the amount of force the government engages.

Culture is a strong fossil difficult to erase, however long a colonial project lasts. In fact, the outcome of the kind of experiment Kaduna State now engages has never worked elsewhere, rather it had fueled the embers of suspicion leading to a sustained ethnic crisis in Bosnia, Rwanda, and recently in Myanmar, etc.

A stitch in time saves nine.