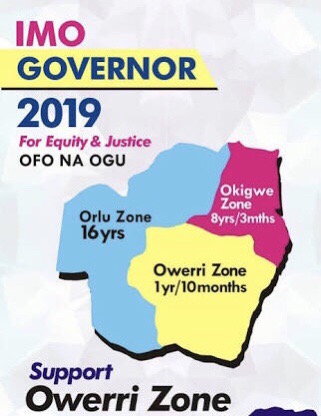 As Leaders converge to Strategize on way forward

Rising from a well-attended summit tagged: ‘2017 Owerri Summit’ held last weekend at the Premises of All Saints’ Cathedral Church Field, Egbu, Owerri North Local Government Area, organised by Coalition for Owerri Re-awakening, it was resolved that all political parties should choose their governorship candidates from Owerri senatorial zone for equity, fairness and unity of the state.

In a communiqué reached at the end of the summit coded: ‘Egbu Declaration’ and signed by Senator Samuel Anyanwu, representing Owerri zone in the Senate; Chief Mike Ahamba (SAN), Dr. Paschal Dozie (CON) and Hon. Oliver Enwerenem, they declared that voters in the state should vote for only political parties that choose their candidates from Owerri zone in the interest of equity and justice.

They, however, set up a high powered committee of eminent sons and daughters in Owerri zone to reach out to other zones of Okigwe and Orlu to convince them of the need to support Owerri zone come 2019 to produce the next governor of the state.

It was also resolved that political leaders and followers from Owerri zone should be united on the governorship aspiration of the zone in 2019 and to desist from being used to the contrary, even as they reminded the state Governor, Chief Rochas Okorocha, to stop the demolition of properties and markets in Owerri zone in view of the prevailing harsh economic realities.

The zone also urged the governor to embark on commensurate compensation to those whose properties were destroyed as well as payment of outstanding arrears of pensions and gratuities in the state to mitigate the sufferings of the people concerned.

The summit had earlier viewed with shock and disappointment the lack of appreciation of the sacrifices made by Owerri zone in the election of governors from other zones especially that of Chief Achike Udenwa in 1999 at the detriment of Owerri zone person.

It however, condemned the lack of patriotism by some persons and organisations of Owerri zone extraction who specialise in partnering outsiders to frustrate the aspiration of Owerri to govern the state, and noted with nostalgia that the Owerri zone remained in the entire South-east geopolitical zone that had not produced as governor in the current political dispensation that began in 1999.

The leader of the zone, Chief Emmanuel Iwuanyanwu, lamented the injustices meted to Owerri zone over the years for the none adherent of the sharing formula agreed by the leaders of the state at the beginning of the present political dispensation in 1998.

He highlighted the many sacrifices the Owerri zone had paid for the unity of the state but regretted that such effort had not been reciprocated by other zones in the state.

The summit was attended by leaders and members of all the political parties in the state and agreed to reconvene again to continue to forge ahead the aspiration of the zone in 2019.