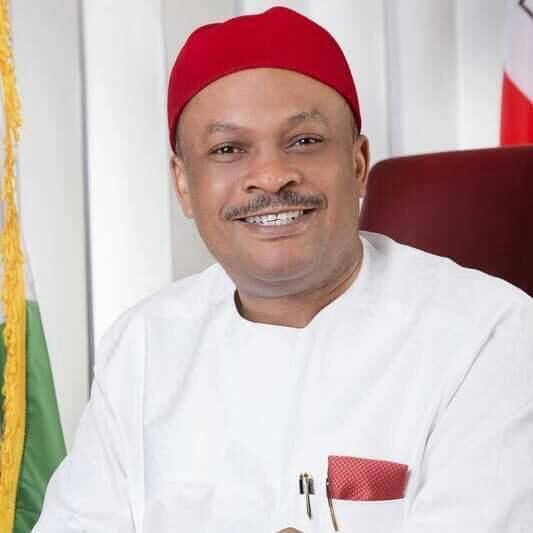 Senator Samuel Anyanwu has expressed deep concerns over the spate of infrastructure especially bad roads in Owerri the State capital, while promising a sustainable solution when he is inauguration as the governor of Imo State in 2019.

Senator Anyanwu who represents Owerri Senatorial Zone in the Senate made his feelings known while addressing some PDP delegates who paid him a solidarity visit in his Owerri residence. He regretted the sufferings the people of the State are going through as a result of bad roads in Owerri.

Senator Anyanwu who is also a leading PDP governorship aspirant in the State told the delegates that it is unfortunate that the situation in the State has degenerated to the level that no single sector is working under this present APC government. He chided the APC led government in the State for allowing the people go through such excruciating pains under her watch.

“Owerri used to be regarded as the cleanest State capital in the past which was a thing of pride to all of us, but what do we see today, a decayed infrastructure. “There is no single road that is motorable in Owerri. “All the roads leading to the State capital are in deplorable conditions and motorists and other road users spend quality time before they can navigate their way into Owerri. This is terribly bad” he said.

Senator Anyanwu insisted that no economy can strive under the present condition as businesses will be adversely affected and people will surely miss their scheduled appointments.

“The truth is that Imo people are tired of this APC government both at the Federal and State levels because they have failed the citizens. “All the people is asking now is that PDP should come and take over government, but they should give the ticket to someone that can win election for them”. Senator Anyanwu stated.

He told the delegates that he is in a hurry to restore the dignity of the State which has been badly battared, but can only achieve that if the party gives him the ticket in the forthcoming primaries. He said his joining the guber race is a divine call and promised not to let the party and Imolites down. He stated that his records of performance from the time he was the executive chairman of Ikeduru local government till date speak for him.

In their speech, the delegates who spoke through Arch. Innocent Ogbonna said they came to pledge their support to Senator Anyanwu who they have discovered after a detailed investigation has the goodwill and capacity to deliver the party in the general elections.

Arch. Ogbonna informed that they are PDP delegates of like minds across the State who are desirous of supporting a genuine aspirant that can win the election for the party. He said what the party needs now is candidates that can deliver because the party cannot afford to disappoint Imo people again.

The delegates said they have been able to gather a good number of delegates who are on the same page with them and are ready to make a statement in the coming primaries. Prayers were offered for the victory of Sen Samuel Anyanwu both in the primaries and in the general elections, as well as for a hitch free elections in the State.