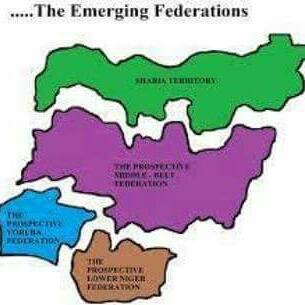 “The Caliphate Operated Unitary Nigeria under the Rogue 1999 Constitution, is an adverse Suzerainty and Occupation, forcefully suppressing the Sovereignty of the Indigenous Peoples of Nigeria, just as the British Suzerainty did, during the nearly 100 Years of British Colonization between the 1860s and 1960” – LNC, July 4, 2011.

As the distressed Constituent Component Nationalities of Nigeria, Entrapped in a Union of Death and Attrition, struggle to extricate their Peoples and Territories from the failed Lugardian Experiment of 1914 that goes codename “Nigeria”, it is pertinent to beam the searchlight into the true nature of the monster they are contending with.

There is an important background that is largely unknown to a majority of those leading the extrication efforts by way of Self-Determination/Independence Campaign, on behalf of the Indigenous Peoples of Nigeria from a Nigeria that has become worsening nightmare for their People.

That largely unknown background holds the key to understanding WHY Nigeria is the way it is and HOW to best to proceed with the task of extricating the hijacked and Suppressed Sovereignties of the Entrapped Constituent Components Nationalities.

The LNC and it’s MNN Alliance Partners which excavated and thoroughly examined this deliberately concealed background, crafted a Grand Script to dismantle the entire fraud in a manner that restores the hijacked Sovereignties to the Entrapped Non-Caliphate Constituent Component Nationalities through an orderly Process that will deploy the Globally Settled 21st Century tools of REFERENDUMS and PLEBISCITES, in keeping with the Self-Determination Rights of the Nationalities. All Stakeholders interested in resolving the intractable Nigerian Quagmire for their People, are now invited to this facilitating background key.

It is a fact of history that the Country, “Nigeria” was purely a Business Venture creation of the British in the 1900s, and recently Declassified Secret Colonial Records as well as other Colonial Documents yet to be Declassified but now obtained, expose the fact that the said British Business Venture, (largely criminal), was erected in Collaboration with the then Sokoto Caliphate that had by Jihad, since about 1804, established Control over the Northernmost fringes of the vast Territory tagged “Nigeria” by the British.

The British Suzerainty over Nigeria (External Colonization) was in 1960, replaced by the Fulani Caliphate Suzerainty (Internal Colonization), in an elaborate scam packaged as “Independence”, but which in reality was a mere Transition from External Colonialism to Internal Colonialism. The Fulani had as the Local Agents of the British-Controlled Joint Venture, (Nigeria) stepped into the shoes of the British. That Joint Venture is up and running to date and is currently defined by the Caliphate-Imposed 1999 Constitution under which the Non-Caliphate rest of Nigeria are merely glorified Slaves

Both suppressed and still suppress the Sovereignty of the Indigenous Peoples of Nigeria.

The two (the British and the Fulani) are separate belligerent forces that came upon the Indigenous Peoples from outside the Territory we now call “Nigeria” in search of fortune, one from the Sahel, charging in from the Sokoto-Kano by way of Jihad in a Southward Campaign towards the Atlantic Ocean, and the other the Atlantic Waterfront, in a Northward Campaign inlands towards the Forest Belt and the Savannah, against the same targets.

The two alien forces met halfway in the Middle Belt axis between Ilorin and Benue Basin, engaged in some scuffles briefly but quickly settling their differences like two Robbery Gangs that decided to join forces against the same target. The Declassified Records now show that it was that joining of forces that birthed the rogue Joint Venture which was formalized in 1914 by way of the so-called “Amalgamation”.

The LNC has in it’s possession, concealed Colonial Documents evidencing these Crown Malfeasances and will in the days ahead, Disseminate same to the interested Public as a part of the wider Public Enlightenment in furtherance of the extrication efforts.

In preparing Nigeria for Independence in the 1950s, the massive British manipulations in favour of the Caliphate North, including heavily padded Census figures and gerrymandering, were done to emplace Structures that reinforce the Master-Servant Union the British designed Nigeria to be which will also permanently chaperoned by the British.

If anyone is in doubt about the pre-1914 British manipulations in favour of the Caliphate North (Fulani) or the pre-1960 reinforcement of the Master-Servant Nigeria, or the 1999 Consolidation of the 100 Years of heartless British Manipulations by way of the so-called “1999 Constitution” the following should clear such doubts:

(1) “We have released Northern Nigeria from the leading strings of the Treasury. The promising and well conducted Youth is now on a allowance of his own and is about to effect an Alliance with a Southern Lady of Means. I have issued the Special License and Sir Frederick Lugard will perform the Ceremony” – Secretary For the Colonies, Lord Harcourt, referring to the import and purport of the impending Annexation of the then Protectorate of Southern Nigeria to the then Protectorate of Northern Nigeria, excerpted from a Cablegram of December 31, 1913.

(2) “The New Nation called Nigeria should be an Estate of Our Great-Grandfather, Uthman Dan Fodio. We must ruthlessly prevent a Change of Power. We use the Minorities of the North as willing tools and the South as a Conquered Territory and never allow them rule over us, and never allow them have control over their future” – Sir Ahmadu Bello, Premier of Norther Nigeria Celebrating the maturity of the 1914 Grand Bequest of Southern Nigeria to Northern Nigeria (Amalgamation) by the British Crown with his lieutenants and reeling out a Battle Script on how to permanently preserve that very highly priced Possession (Southern Nigeria, described by Lord Harcourt in the 1913 Cablegram as “the Southern Lady of Means”).

(3) “The full execution of the Ahmadu Bello Mission Statement and Battle Script of 1960 resulted in the current Master-Servant Constitution of Nigeria 199, imposed by the Political Descendants of Ahmadu Bello, between 1966 and 1999, everyone according to his Station as assigned in the 1960 Battle Script”

(4) “Anything short of a Northern President is tantamount to stealing our Presidency. Jonathan must go, and he will go. If Jonathan or any other Southerner becomes President, the North is determined to, and will make the Country Ungovernable” – Lawal Kaita, Former Governor of Old Kaduna State, October 20, 2010.

Between Items (1), (2) and (3) above, it is not difficult to see how Nigeria became the Master-Servant Union it is. Item (3) explains the rationale for the LNC inspired 4-Bloc MNN Map as the formation in which we must now engage the longstanding Nigerian Question and Item (4) encapsulates the attitude of the belligerent and recklessly obdurate Caliphate the rest of Nigeria is contending with, and therefore the imperative of the Solution Model that takes down wholesale, the Caliphate Forged Title Deed, called “the 1999 Constitution” as Strategy for freeing the Entrapped Constituent Component Nationalities of Nigeria from the Caliphate Stranglehold called “Nigeria” whilst allowing Willing, Compatible Contiguities to forge fresh Post-Nigeria Protocols in unfettered Self-Determination.

It is pertinent to note that the 12 Contiguous States of the Caliphate North which Simultaneously imposed Sharia in year 2000, had by that step Seceded from the Secular Union of Nigeria and that by the MNN LAGOS DECLARATION OF JUNE 30, 2011, Non-Caliphate rest of Nigeria Initiated and Mandated the Formal Regional Repudiation of the fraudulent 1999 Constitution as the Basis of Nigeria.

The Formal Regional Proclamations of this Repudiation had been done throughout the South and the Middle Belt between 2015 and 2018 and the logical next order of business in the Grand Script is therefore, the immediate Shutdown of any further National Elections anchored upon the Repudiated 1999 Constitution.