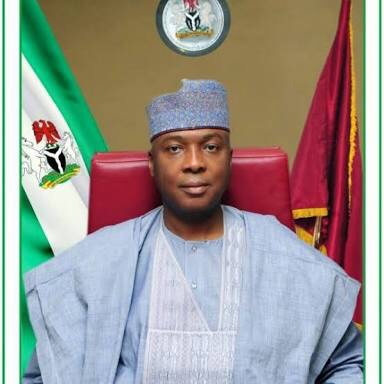 Saraki has said that the Peoples Democratic Party, PDP, will not disintegrate following former Vice President Atiku Abubakar’s emergence as the Presidential flag bearer of the party, at the just concluded national convention of the party held in Port Harcourt.

Saraki in a statement signed by his Special Adviser on Media and Publicity Yusuph Olaniyonu, and made availabe to DAILY POST on Monday morning, said that those hoping that the opposition party will be rocked by crisis had already miscalculated, vowing to do all within his power to ensure PDP’s victory in 2019.

The lawmaker also commended the delegates to the convention and members of the organizing committee led by Governor Ifeanyi Okowa of Delta State for holding a convention in which a candidate was elected in a free, fair, transparent and rancour-free atmosphere.

“Our just concluded convention was a partisan event which the country can show-case as an example that democracy has a future in Nigeria and that when we are determined we can elect our leaders without any manipulation, intimidation and violation of the law and democratic norms.

“The credit goes to the leadership of our party led by Prince Uche Secondus, the organizing committee led by Governor Okowa, the numerous delegates who came from across the country and conducted themselves in a civil, mature and democratic manner. I give kudos to them.

“My commendation also goes to the government and people of Rivers State for providing the best necessary facilities for hosting over 5000 delegates, campaign workers, security personnel, observers, media people and others who came to play one role or the other in the convention.

“More importantly, let me congratulate the winner and new flagbearer of our party and all the fellow aspirants for running credible and mature campaigns and working all along to reassure millions of our fellow party members and other Nigerians that PDP will leave the convention venue more united and ready to work together to form the next government at the federal and other levels in a manner that we will unite the country, grow the economy, carry along all stakeholders, empower the youths and make government serve the people better.

“Like I said in my speech at the convention after the official declaration of Alhaji Atiku as winner, all the other aspirants, especially myself, are ready to walk and work with him to spread the positive message of the PDP and his campaigns acrosss the nooks and crannies of the country such that the PDP will win the 2019 general elections.

“Those who expect that the party will degenerate into crisis after the primaries have miscalculated. We will all work for the Atiku-PDP ticket to succeed and contribute ideas into solving the problems confronting Nigeria today. The event in Port Harcourt between yesterday and today was a victory for Nigeria and for democracy. We will not lose the momentum but sustain it to rebuild Nigeria and elect Alhaji Atiku Abubakar as the next President of Nigeria.

“I wish all our delegates and other participants in the convention journey mercies back home”, Saraki stated.