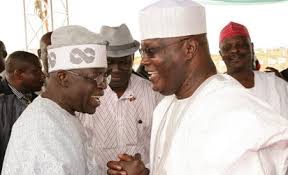 Indications have emerged that the National leader of the All Progressive Congress (APC) Asiwaju Bola Ahmed Tinubu may have shifted allegiance from his party’s Presidential candidate, Mohammadu Buhari to that of the People’s Democratic Party, PDP, Alhaji Atiku Abubarkar towards the 2019 Presidential election.

The Southwest strong politician is said to be weighing his options as he may not be able to bear the humiliation that may follow, should antagonists succeed in pushing out the APC chairman, Adams Oshiomole, following growing call for his removal by Governors in the party.

Jagaban, a close source said, is restrategising ahead of the coming elections as a result of what the source described as his measure to ” avert repeat humiliation “

Thepage source confirmed that already a meeting has been scheduled to hold between Tinubu and Atiku in Ghana over the issue.

Tinubu it was gathered, started reconsidering his support for the Buhari presidency after the emergence of his bossom friend and political ally, Atiku Abubarkar as the presidential candidate of the PDP.

According to sources, the Jagaban of Borgu’s camp was jolted by the popularity so far garnered by the candidature of Atiku, especially within major interests in the Southwest because of his (Atiku) restructuring agenda which APC had been reluctant to pursue despite initial promise.

Thepage gathered that, should Tinubu eventually decide to support the Atiku bid, the restructuring issue would be his public alibi for doing so.

In what our source also described as the ground preparation for the launch of his restructuring campaign along the Atiku narrative, former Interim National Chairman of the All Progressives Congress (APC), Chief Bisi Akande at the weekend purportedly spoke the mind of Tinubu in far away United states of America where he delivered a talk tagged “Devolution Of Powers and National Restructuring”

“I can confirm to you that the position Baba canvassed in America is Asiwaju’s position and by the time every plans would have been perfected, Asiwaju will take the narrative from Baba” canversed our source.

In the paper which he delivered at the APC-USA Second Annual Convention in Washington DC, United States of America where he was guest of honour, Akande faulted the previous military governments that ruled Nigeria for 29 years since independence, for creating what he described as the ‘lopsided political structure’ of the country.

The former Osun State governor accused the military of creating states and local governments by fiat selfish reasons rather than through any scientific political reasoning.

He lamented that the military might have inequitably created more local governments per population per state in the North than in the South, thereby giving the North an unfair advantage in revenue allocation from the national treasury.

He therefore called for restructuring, which he described as “equitable rearrangement and redistribution of the existing states and local governments per population within the various ethnic nationalities”.

Appropriate amendments to the country’s constitution, according to him, will be required to accommodate the various rearrangements and redistributions.

He identified restructuring as a Herculean task for all Nigerians compared to the political change of power for which the APC was put together.

Chief Akande, making public this time,the position on restructuring, which is in line with the Chief agenda of Atiku as the campaigns beckons, our source informed, was not a coincidence. But a foundation laying for what may take place soon since Chief Akande and Tinubu are not known to share different views on political issues.

Incidentally, the Tinubu shift in allegiance plan is being made easy with the growing campaign against the APC chairman, Adams Oshiomole which our source said, may make Tinubu reconsider is involvement with the APC if Oshiomole is eventually pushed out.

According to Thepage source who is also a force within the Tinubu political space, the former Governor of Lagos state can not afford to operate in the party again, without a little control of its structure which he seems to have gotten under the Oshiomole dispensation.

“Tinubu is aware that those calling for the removal of Oshiomole are also indirectly saying they want Tinubu’s influence withered and with the experience of the Oyegun era when he lost influence in the party still fresh, Asiwaju will naturally review his relationship with the president should Oshiomole leaves”

According to the source, Tinubu may not dump the APC, but strike a working relationship with Atiku on how to deliver the Southwest for the 72 year old PDP candidate for the presidential election.