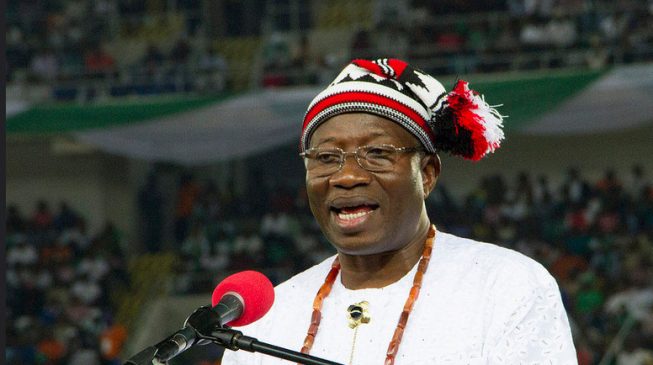 Finally, through that book, the world will get to see the man behind close doors and will, I hope, found out that no Nigerian leader has shown the level of self sacrifice, self control and restraint that former President Jonathan showed during and after his five year tenure as President.

However, because of a long succession of brutal military dictators beginning from 1966 and continuing even into the advent of the Fourth Republic, many Nigerians have been conditioned to see brutality as strength and restraint as weakness.

But after three years of a brutal and brutally ineffective President, many citizens are only coming to know now what I knew in 2010-that Dr. Goodluck Jonathan is a leader of men who sees the people as the big picture rather than himself.

He tried to show Nigerians the true meaning of leadership. Unfortunately, the psyche of our people has for long been conditioned to respecting leaders who rule, who boss and who throw their weight around. It was a culture shock to have a leader who rather than throw his considerable weight around, three his intellect around, which is why no leader in Nigeria’s history has built as many schools as Dr. Jonathan did.

And the thing is that he did not have to. Primary education is the constitutional preserve of the states. Yet President Jonathan built 165 almajiri schools because he could not sit by and watch as 11 million Nigerian children, mostly in the North, were out of the school system.

I had the privilege of asking him why he did what he did and he told me in California, while playing with my children, as follows ‘Reno, no investment yields as much profit as education’. Indeed, Jonathan is a philosopher king!

From him, I learnt that the best way to be a leader is not to boss people around, but to help solve their problems. Think of it this way. There are many ships in the sea and the sea is dark. If you want all the ships to come to you, then be a lighthouse and they will come to you of their own accord.

I remember when I joined him on a trip to London and at the airport, the Nigerian High Commission to the U.K. had provided a Mercedes sedan to pick him up from the airport. I was to join him at his hotel, so I escorted him to the car with another of his associates. He got in and then looked at me and asked what I was waiting for. I told him I would get a taxi and he goes, ‘don’t be silly’, then does the most amazing thing. He shifted to the middle of the back seat and beckoned on my friend and I to join him on what is known as the owners’ corner in Nigeria. I know of no other leader with the humility to do that.

A quintessential leader is Dr. Jonathan. A man who treated everyone with respect even though he was the President of the largest Black nation on earth who led her to become Africa’s economy. One thing you can be sure of is that if President Jonathan is looking down at you, he is doing so only because he is admiring your shoes.

I learnt true humility from him, but it was in the area of communication that President Jonathan schooled me the best. From him I discovered that learning the art of communication will make you a leader. Dr. Jonathan never speak just to express yourself. He considers that a waste of time. Rather, he always speaks to persuade others. When others are talking, he listens to them as if they are the most important persons on earth. Honestly, it is an almost ecstatic event to have a one on one communication with Dr. Goodluck Jonathan.

As he turns 61 today, I want to remind Nigerians of a statement he made four years ago.

On the 7th of March 2014, then President Jonathan said “I am loyal to Nigeria’s economy. I don’t have accounts or property abroad. All my children school in Nigeria”.

Till date, nobody has been able to contradict that statement because it is true. But even more impressive is the fact that not one of those who have made it their career to blame Jonathan for everything that is wrong with their lives, can say the same thing.

Dr. Jonathan was able to achieve this because he was a patriot who really believes in Nigeria. Look at his initiatives to turn around the lives of Nigerian youths. You have the Youth Enterprise With Innovation in Nigeria (YouWin), the Graduate Internship Scheme (GIS), the Presidential Special Scholarship Scheme for Innovations and Development scholarships (PRESSID) to First Class graduates of Nigerian universities to mention a few.

With these schemes, it is no wonder that Nigeria under Jonathan became the third fastest growing economy in the world according to CNNMoney and the International Monetary Fund.

Nowadays, those who rode to power on the back of the freedoms that Dr. Jonathan ensured in Nigeria now threaten to lock up their critics citing ‘hate speech’. Have these individuals ever sat down to consider that under Jonathan’s leadership, not one single person was sent to prison because of anything he or she wrote or said about the President or the government he headed. Nigeria had no political prisoners under Jonathan’s administration and the nation certainly did not have any prisoners of conscience because Jonathan himself ensured that he acted according to his conscience in all he did.

On social media, I read many Nigerian youths saying things like, how did we go from ‘my ambition is not worth the blood of any Nigerian’ to being called lazy Nigerian youths? That is one question I cannot answer. But one thing I know, the Nigerian youth under President Jonathan were some of the most talented and productive.

That is why Nigeria was rated by Gallup as the happiest nation in the world under Jonathan. Think about that for a minute and then join me in wishing Dr. Goodluck Ebele Jonathan a very well deserved happy birthday as well as a long and fulfilled life to continue serving humanity through the Goodluck Jonathan Foundation.