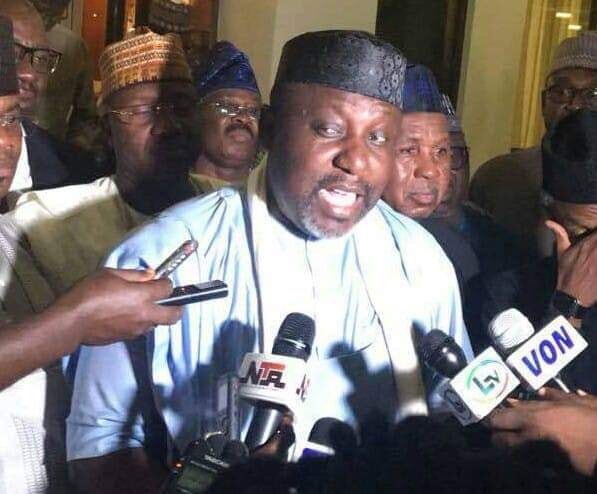 One thing as certain as tomorrow is that the incumbent Governor of Imo State, Owelle Rochas Okorocha will from May 29, 2019 cease to be the Chief Executive of the State. However, what the Governor is not too sure of presently is who would be his successor.

Before now, Okorocha had wished to produce his own hand-picked successor, which naturally is the dream of every Leader. Therefore, it is not a selfish act for Okorocha to work to leave a successor behind.

Even tenants packing out from an old house to a new one, ordinarily try to bring the new tenant that will take over the old house. So, that is life.

But with the look of things now, except Okorocha strategizes quickly, he may not have a hand in who succeeds him. And unfortunately, this was a project he had given all his attention to, as he had boasted severally that although his predecessors could not produce their successors, he, Rochas Okorocha will break the jinx.

However, the issue of successsorship in Imo State has taken this serious dimension simply due to the prominence Okorocha attached to it. But history has proven that since 1999, no out-going Governor of Imo State has succeeded in leaving behind a choice successor.

Governor Achike Udenwa failed in this direction. And Okorocha needs not to be reminded that he is not the choice of Chief Ikedi Ohakim as successor.

Therefore, for me, what should be Okorocha’s happiness is that in the end, God Almighty answered his prayers of becoming a Governor of Imo State.

Okorocha should realize that among all those with whom he attempted to be Governor of Imo State in 1999, he is the only person whose own dream has come to pass, while others have, and been still battling to actualize that ambition to no avail.

Chief Humphrey Anumudu who was touted to have won the Peoples Democratic Party PDP Governorship primaries of 1999, which Okorocha also participated in, is till date still struggling to actualize that plan.

Ambassador Greg Mbadiwe who also was a top runner in that 1999 exercise has since moved on, as he discovered that the project is no more realizable.

We also remember Chief Ezekiel Izuogu, who was just a stone-throw away from Imo Douglas House, but the now Statesman has since taken it as it were, and has remained a committed son of Imo State nay Nigeria.

What of Chief Martin Agbaso, who in 2007 was just minutes away from being pronounced the Executive Governor of Imo State, but fate had another story for the Emekuku, Owerri North LGA born Business Mogul.

But senior Agbaso, whose younger brother, Jude was humiliated out of office by Okorocha, as the Deputy Governor of Imo State has since assumed the position of a Patriot and clearing House, turning his Emekuku Palace to a consultation podium for emerging new Leaders.

The case of Senator Ifeanyi Araraume is always here with us. If not for President Olusegun Obasanjo, may be Araraume would have since been a former Governor of Imo State.

Yet, the Ishiebu, Isiala Mbano LGA born politician is still fighting in 2019 to actualize that dream. And this is while Okorocha completes eight years as Governor!.

Looking at this scenario, does Okorocha have any reason not to Thank God? Even Chief Ikedi Ohakim, whom he took over from in 2011 had tried to return to that office in 2015, and till date still in the race for Douglas House.

If there is any politician in Imo State who should sit down and count his blessings and name them one by one, that lucky fellow is Owelle Anayochukwu Rochas Etelberth Okorocha.

In this case, the out-going Governor of Imo State has every reason to rejoice and not to be unhappy, just for the simple reason that he failed to put a successor in office.

Everybody in Nigeria knows that Okorocha did everything possible to make his son inlaw, Chief Uche Nwosu the next Governor of Imo State, after him. Therefore, if the project fails he should not be so worried, since Uche Nwosu himself is not living in the Moon, and knows that his father inlaw loves him, trusts him, and wanted to handover Imo State to him, but it did not work.

I did not work not because it was Okorocha’s fault, but because Imo State is not an Autonomous community with a ruling House, with a hereditary kingship.

The Governor once said that he had a “Convenant” with Uche Nwosu. But he is a man, and fought like one, but Imo is a public enterprise whose owners are the people. They have decided and that is final.

If Imo State were to be a Okorocha’s private company, or even Rochas Foundation, Uche Nwosu could afford to claim that his father inlaw did not live up to his promise. Late Music Icon, Luther Vandross sang in one of his epics “I did my best, but my best was not that good”.

Therefore, what Okorocha should engage his mind now is on how to leave office on a good note, so that he could be remembered tomorrow with posterity giving him a fair hearing.

For many years he strived to be Governor of Imo State, and eventually in 2011, his prayers were answered. Therefore, after Eight years tour of Duty, Okorocha should now sit down with his wife, and ask himself how much he has impacted on the lives of Imolites, and if need be, what could be done with the remaining five months in office to etch his name in the sands of history. He should ask himself if he has utilized well the humongous funds that came into Imo State since 2011 he assumed office. What should be his place in Imo State after May next year?

About two months ago while swearing-in the new Secretary to Imo State Government, Okorocha told the world that although he had already spent seven years in office, with seven months remaining, he assured his supporters that he would use the few months remaining to complete all his on-going projects.

That statement gladdened the heart of Imolites, as many had hoped that Okorocha was not aware, or have forgotten the legion of uncompleted projects that dot all parts of Owerri, the State capital.

After that “Executive Promise” one had felt Okorocha would expedite actions on the projects for his own sake as history beckons on him after May 29, 2019. But unfortunately, weeks after Okorocha made that “Government House Declaration” politicking heightened and the Governor has since been deeply engrossed with politics that he was hardly in the State any more. Abuja has occupied Okorocha in the last two months.

Now, the issue of his successor seems to have taken over all the Governor’s engagements leaving Imo people to worry about the completion promise.

As it stands now, Owerri still begs for serious attention, and recently work has started in some of the roads, particularly Wethral Road.

But with the short-time remaining for Okorocha, especially as he is in the race for Orlu Senatorial zone, would it be possible for Okorocha to concentrate and complete these projects, mainly those he caused their present sorry conditions, through demolitions and repairs?

The works begging for Okorocha’s attention are humongous and requires adequate attention, or else Okorocha may vacate office as the Governor that created most problems for Imolites, than solving them.

No matter what may be the masses general perception of his Government, Okorocha needs to disappoint his enemies by surprising them with completion of these projects, even if they still maintain the qualities for which Okorocha’s administration is noted for.

Half bread, they say, is better than none. And in this case, Akara is better than Indomie! Okorocha should not allow the issue of successorship distract him so much that he leaves his projects abandoned for the incoming administration.

He may have dreamt of leaving behind a successor who would continue from where he stopped. Now, with the plan looking unfeasible, what will Okorocha do?

Would he continue to sulk over the aborted successorship project and allow history to give him failed mark? Does he think Imo people will judge him on planting a successor than a reign full of action and achievements?

He must realize that his name is at stake. He had already informed us of his 2023 Presidential ambition. He is a Senatorial candidate now. Therefore, the voters would demand his stewardship in Imo State for Eight years as a starting point before handing him more elective opportunities in the future.

This is the reason Okorocha should shake-off the successorship hang-over, thank God for his mercies and tidy up what he already has in hand for his political future, before demanding for another. This is my take.