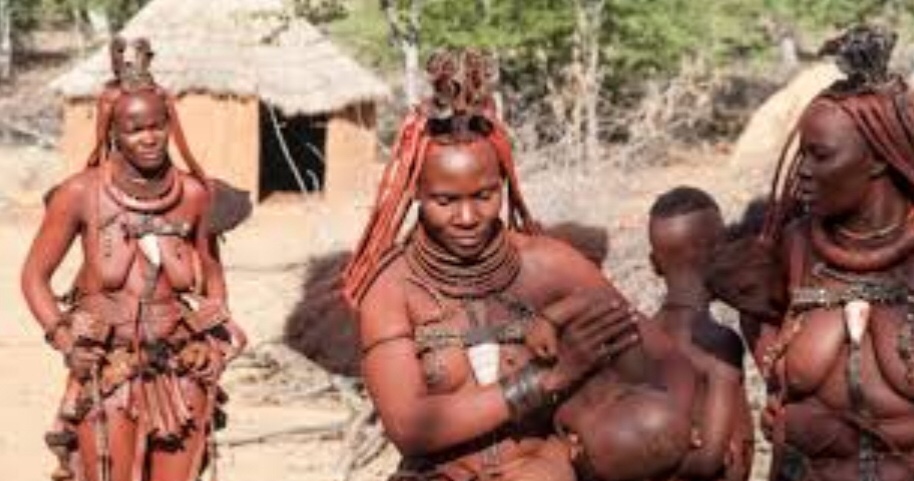 The people of Ovahimba and Ovazimba tribes in the Kunene and Omusati regions in Northern Namibia have an upheld culture that has defied western influence and agitation.

With a population of over 50,000, the women engage in the daily activity of milking their cows, taking care of the children and other extensive duties while the men go hunting leaving, sometimes, for an extended period of time. These nomads’ wealth is determined by the number of cattle one has. A polygamous people, the Himba girls are married off to male partners selected by their fathers once they attain puberty.

You cannot ignore the red skin they have. The red colour seen on their skin is called, the otjize paste ( a combination of butterfat, omuzumba scrub and ochre) and its function is to protect their skin from the sun and insect bites. They are also guided by the belief that the colour red signifies “Earth and blood”. Rather than take their baths, the women take a smoke bath and apply aromatic resins on their skin. 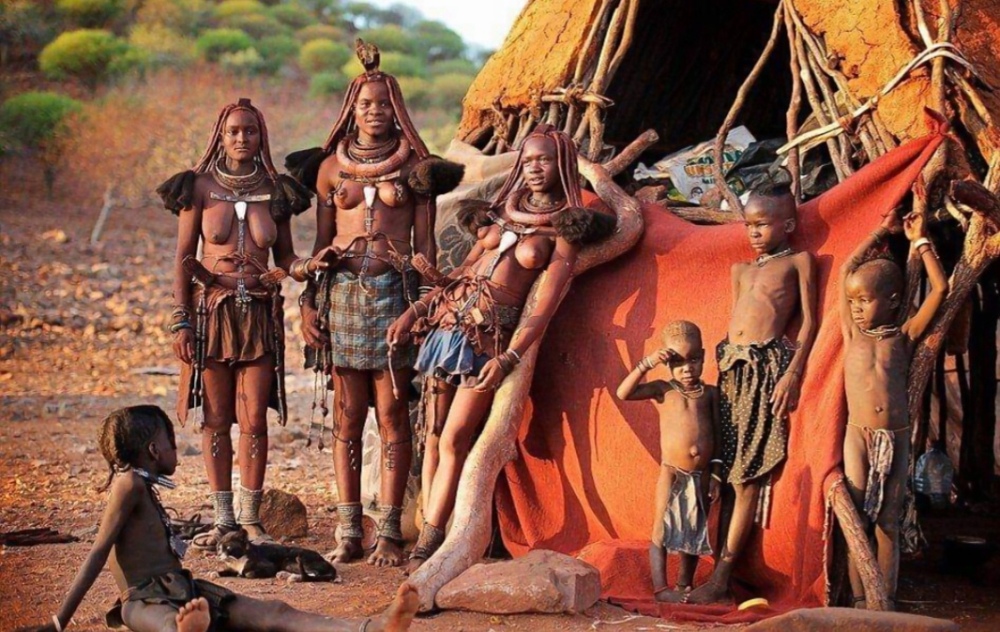 Give honour to whom it is due: This saying is applied differently in this tribe. When a visitor comes knocking, a man shows his approval and pleasure of seeing his guest by giving him the Okujepisa Omukazendu treatment. This practice literally means that his wife is given his guest to spend the night while the husband sleeps in another room. In a case where there is no available room, her husband will sleep outside.

This handed down tradition has its “benefits” in the community: it reduces jealousy and fosters relationships. The woman has little or no opinion in the decision making. Submission to her husband’s demands come first. She has an option of refusing to sleep with him but has to sleep in the same room as the guest.

She is also entitled to give her friends to her husband when they visit but this rarely happens.

The Ovahimba are the original traditional Herero who crossed the Kunene and came from Angola to Namibia in the middle of the 16th century. They settled in the Kaokoveld, the north-western part of Namibia and lived a semi-nomadic, pastoral lifestyle.

The early history of the Herero was fraught with severe droughts and other disasters. Large groups of the Herero people left the Kaokoveld and looked for better grazing grounds for their herds in the south-east.

The remaining Herero in the Kaokoveld came under attack from the Swartbooi and Topnaar Nama in the 19th century. The Nama entered the Kaokoveld from the south, also looking for better grazing grounds. In 1850 the Nama established a base in Sesfontein from where they organized raids against the Herero of the Kaokoveld. Due to the fact that the Herero were widely scattered and the Nama had much better weapons, large cattle herds were raided from the Herero in the next 20 years.

As the situation deteriorated and the loss of their material and social wealth increase the Herero of the Kaokoveld fled over the Kunene River into Angola and took shelter with the Ngambwe, which granted support to the refugees. They called the Herero “Ovahimba”, which means “beggar” in the language spoken by the Ngambwe. Over the years the Herero took over this name still use it until today.

Most of the Ovahimba followed a popular warrior named Vito back to Namibia in 1920. Ever since and up to the Namibian independence in 1990 the Himba were able to live their traditional lifestyle. During the recent years the Ovahimba have been more exposed to the influences of the modern world, although this mainly refers to the consumption of unhealthy foods, cool drinks and alcohol. The positive achievements of modern society like a proper health system, modern schools, pension funds etc. did not yet reach the majority of Ovahimba. 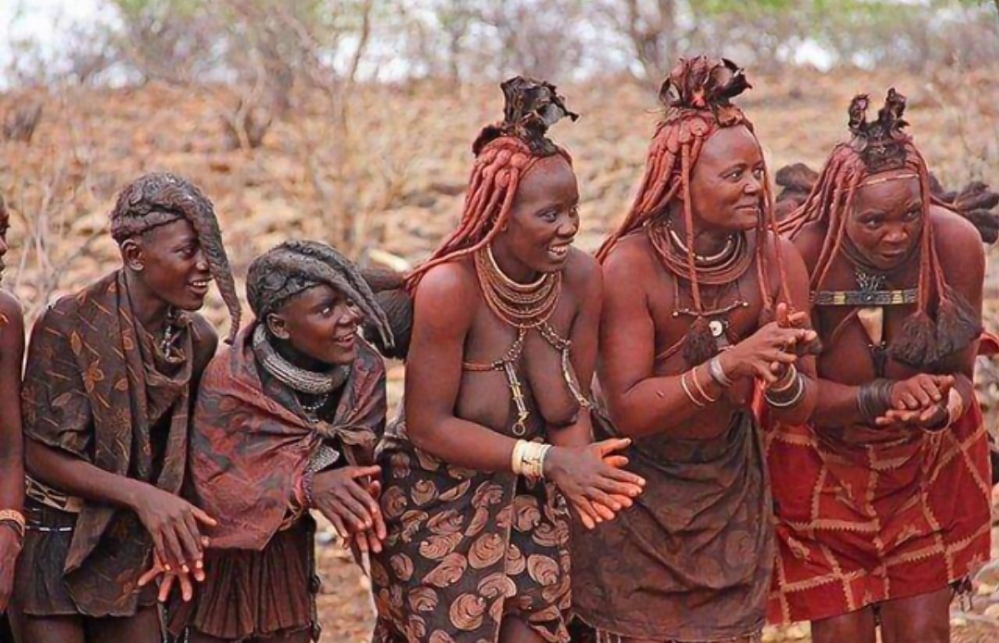 The place where most of the religious conversation takes place is the holy fire (okuruwo), a sacred place which is kept by the fire keeper. The holy fire should always smolder, because it is the sacred connection between the ancestors and the living. Every family (every homestead) has an own holy fire which is placed in the middle between the main hut of the homestead and the kraal.

The Ovahimba live in large homesteads together with their extended families. They still practice polygamy; an average Ovahimba husband has two wives. Each of the wives has her own hut, the main wife resides in the main hut opposite the entrance of the kraal. Marriages are often arranged by kin. It happens that even infants are betrothed to adult man in a wedding ceremony. The marriage is never consummated until the girl reaches menarche and becomes an adult.

It is a traditional custom to knock out the four lower incisors at the age between ten and twelve. This has a big social and religious meaning in the life of an Ovahimba. There are also several initiation rites for boys and girls. Boys are circumcised, girls undergo a ritual where they have to leave the homestead during their menarche and are allowed to return back later in company of experienced older women, followed by a little celebration among friends.

Traditionally the Ovahimba are a so-called “zero-income cultures”. They define wealth solely based upon the number of cattle the family owns. Besides having large cattle herds the Ovahimba breed goats and sheep, grow crops such as maize and millet. However their main diet is milk and milk products like sour milk as well as wild herbs, chicken eggs and meat.

During the dry season some members of the extended family leave the homestead with their herds to find water and grazing grounds in remote areas. Part of the family stays at the homestead.

The Ovahimba are known as the “red nomads” of Namibia. Especially the women, but also some men are famous for covering themselves with a perfumed mixture of ochre pigment and butterfat which has cosmetic characteristics. In fact Ovahimba women never wash themselves with water but are very neat when it comes to personal hygiene. The ochre fat protects the Ovahimba against the sun and the climate of the extremely hot Kaokoveld and is also an effective mosquito repellant.

The hair style and the jewelry are very important in the traditions of the Ovahimba. Hair styles indicate social status and age.

I have some very beautiful pictures to this article, but have decided not to show them, lest Facebook ban me for showing off traditional dressing in which the women show off their breasts. Send me a messeng, if you would like the images.