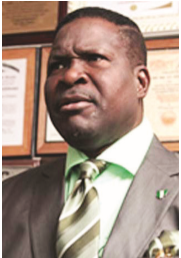 A strong judiciary is one of the irreducible fundamental platforms for any meaningful constitutional democracy. If you terrorise, intimidate, harass and humiliate the judiciary, using strong hand and brute force, it is a stage set for bidding democracy farewell.

The president Buhari government has been very intolerant of any credible dissenting voice in the country. From the crude break in and invasion of judges houses in October 2018, by masked DSS operatives, to the horrific siege laid on the NASS and the residences of the Senate President, Dr Bukola Saraki and his Deputy, Dr Ike Ekweremadu, it is clear that this government, which protects its own members, however corrupt and despicable, has blown into full maximum dictatorship, totalitarianism and absolutism. Nigerians must say no to fascism.

The latest onslaught is against the Chief Justice of Nigeria, Justice Walter Nkanu Onnoghen, a man of great nobility, erudition and lucidity of thought. It has come to light that the government has hurriedly filed charges against Onnoghen, even with a motion (most curiously and unusually), that he should recuse himself from his Chief Justice-ship until the case filed against him is finally determined by the Code of Conduct Tribunal (CCT). This is to force him out of office. The phoney and ridiculous charges are that Onnoghen failed to declare his assets, and that he also maintains domiciliary accounts, contrary to the provisions of the Code of Conduct Bureau Act.

It is clear to any objective observer that the charges are highly political, and designed to intimidate the Judiciary ahead of the 2019 presidential election and force out Onnoghen, who, as the CJN, will constitute the Presidential Election Tribunal that will entertain disputes arising from the presidential election.

Many facts bear this simple deduction out. The petitioner, an NGO, actually committed the freudian slip by anchoring its petition on bearing in mind the imminence of the 2019 general elections and the overwhelming role of the judicial arm both before and after.

The second fact is that even after recommendation of Onnoghen as CJN by the NJC on 13th October, 2016, it took VP Osibanjo the courage to appoint him as CJN on 1st March, 2017, after protests and outcry by overwhelming majority of Nigerians, and at a time PMB was actually abroad on medical vacation. Three, Onnoghen became the first Southerner to be made CJN in 30 years, after the last Southerner, Justice Ayo Irikefe, occupied that exalted office in 1987. Four, Onnoghen has been CJN for well over a year. How come the Executive suddenly woke up from a deep slumber and discovered his operation of domiciliary accounts years before he was appointed CJN, which accounts, according to the petition, had been in existence since 2011, a period during which the CJN had already been a Justice of the Supreme Court since 2005?

When have Nigerian security agencies optimised and displayed such efficiency that a petition written by an NGO on 7th January, 2019, received by CCB on 9th January, 2019, was acted upon with such automatic alacrity that by 11th January, 2019, charges had been filed against Onnoghen. And wait for it, he will be arraigned on Monday, 14th January, 2019, all within one week! What of the provisions of the Code of Conduct Bureau (CCB) and Code of Conduct Tribunal (CCT) Act, which prescribes certain necessary steps that must be taken before a charge is filed?

STATUTORY DUTY OF THE CCB TO FULFIL A CONDITION PRECEDENT BEFORE ARRANGEMENT.

3 The functions of the Bureau shall be to-

(d) receive complaints about non-compliance with or breach of this Act and where the Bureau considers it necessary to do so, refer such complaints to the Code of Conduct Tribunal established by section 20 of this Act in accordance with the provisions of sections 20 to 25 of this Act.

Provided that where the person concerned makes a written admission of such breach or non-compliance, no reference to the Tribunal shall be necessary.

Consequent upon the above provisions, it is a condition precedent to first invite the alleged offender to either make or refuse to make a written admission of the con-compliance. This must be satisfied to cloth the CCT with requisite jurisdiction to try such offender. This provision was tested when Bola Tinubu, former Governor of Lagos State, sometimes in November, 2011, was charged before the CCT for operating foreign accounts between 1999 to 2007. The case was dismissed, mainly because, aside from the fact that the charges were defective and shoddy, the accused had not been invited or confronted with the complaints, and was consequently not afforded the opportunity of admitting in writing, any non-compliance, which ordinarily robbed the CCT of its jurisdiction to try him. I see the same scenario playing out in the Onnoghen case, on the issue of jurisdiction.

The position of the law is that a suspect must first be confronted with the allegations by the CCB and be given an opportunity to reply them. Facts available in the public domain are that an NGO petitioned against the CJN on 7th January, 2019, and same was received by the CCB two days later, on 9th January, 2019. By 11th January, 2019, charges had been filed and arraignment is to be made on the 14th January, 2019. Everything thus took place in one week! When did prosecutorial agencies in Nigeria become so efficient as to accomplish this 8th wonder of the world within such a short time? More significantly is the case of Ngajiwa vs FRN (2017) LPELR-43391(CA), where the Appellate Court held that sections 153(1) (i) (2), 271 (1), 292(1) (a) (ii) and Paragraph 21 of Part 1 of the Third Schedule to the 1999 Constitution, must be read together to mean that any judicial officer accused of an offence must first be subjected to investigation and disciplinary action by the National Judicial Council (NJC). It is after this that such a judicial officer can be arraigned in court. It is obvious that this fundamental step that can cloth the CCT with jurisdiction has been ignored by an Executive too much in a hurry to intimidate Onnoghen and undo the judiciary, having unsuccessfully intimidated the Legislature (NASS).

The last time I checked, the criminal justice system in Nigeria is Anglo-Saxon based, making it accusatorial. This means the innocence of an accused person is presumed. It is different from the inquisitorial French model where the guilt of an accused is presumed. Section 36 of the 1999 Constitution has carefully enacted this and given it constitutional imprimatur.

The most shocking aspect is that the NBA and Nigerian lawyers that should serve as conscience of the nation are silent on these acts of constitutional hara-kiri capable of derailing our hard won democracy. Unknown to these hawks in government, the CJN can never, by a mere motion filed before the CCT, be forced out of office, or be compelled to recuse himself as CJN. This is clearly settled by the provisions of section 292 (1) of the 1999 Constitution which state that the CJN can only be removed from office by the president acting on an address supported by two-thirds majority votes of the Senate. Will the Senate be brow-beaten to accede to this diabolical machination? I think not.

This onslaught is to finally cow and annihilate the Judiciary, the last hope of the common people. Nigerians now appear to live in bondage of dictatorship and absolutism. Citizens now talk in whispers, afraid of even their shadows. Only those who support the government, however corrupt, find peace. Like Naaman the leper, who was deeped into River Jordan seven times and became cleansed of his leprosy, all that a corrupt politician needs to do to be washed clean of his political leprosy (as white as snow), is to decamp to the ruling APC. He would be embraced immediately, given a front pew, inducted into the hall of fame, and put in charge of leading Buharis presidential campaign.

Some Nigerians are still playing the Ostrich in the full glare of this clear and present danger, behaving like the “Chichidodo” bird talked about by the Ghanaian author, Ayi Kwei Armah, in his epic novel, The beautiful ones are not yet born. The bird hates human faeces, but paradoxically feeds on maggots that wriggle out of such excreta. Some people are bent on breaking up Nigeria.