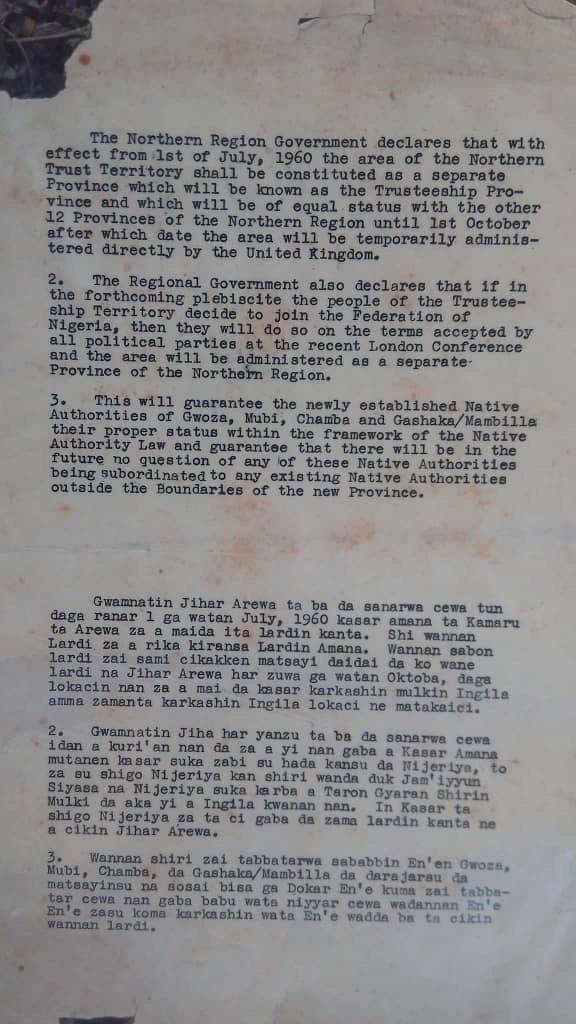 I have always said that in no distant future, the unanswered question surrounding the citizenship of the peoples of the former UN Trusteeship Territory of Northern Cameroon will rear its ‘ugly’ head. But I never for one moment thought that it would be the Ruling Political Party in Nigeria (APC) that would help us open the matter to public debate. Thank you APC.You have made my work so easy.

As a specialist on UN Trusteeship history, I have no doubt in my mind that the non-respect of the 1961 Plebiscite agreement was a time bomb. It is not news that the bomb has exploded in former Southern Cameroon.

In 1979, as an undergraduate student in ABU Zaria, after participating in the effort by my lecturer and mentor, Dr Bala Usman (late), to launch what he called *The Minority Constitution, I looked into the future and saw this day coming. That effort was crushed by the military Government of General Obasanjo, who appeared to have been in a hurry to hand power civilians. Let us not forget that the Obasanjo Constitution (1979) was followed by the Abdulsalam Constitution (1999).⁴

Fast forward to 2014, together with like minds and Stakeholders from the Territory we approached the National Conference organized by President Goodluck Jonathan. We sought for the full implementation of the 1961 Plebiscite agreement. The Conference grasiously reasoned with us. But the APC Government of General Buhari refused to implement the decisions of that National Conference.

Today, 2019, 58 years after the 1961 UN organized Plebiscite, the President of the Federal Republic of Nigeria, speaking through his Lawyer, without historical reflection, publicly declares that Atiku Abubakar, a proud son of former Northern Cameroon, is not a citizen of Nigeria.

My take from what the APC Government has foolishly done through their lawyer is that, it has declared that all peoples of the former Northern Cameroon, who came into Nigeria via the 1961 Plebiscite, ARE NOT CITIZENS OF NIGERIA.

I hope l can be the patient enough to wait for the courts to resolve the side, but most important issue of Atiku’s and by implication the citizenship of the rest of us from the former Northern Cameroon before I can make any further comment.

God Almighty, thank you for what the APC declared.