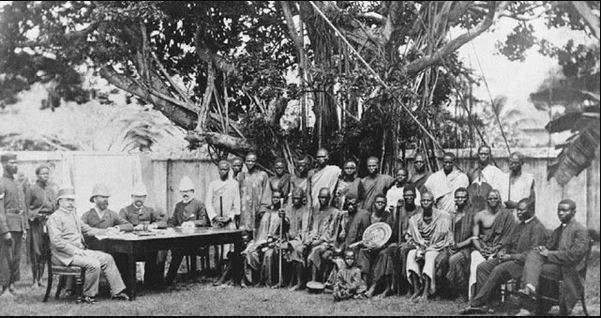 Most nations are formed under the table of brotherhood, tribes and ethnic groups coming together to form a united state.

Not every nation on earth can say this and Nigeria is one of them. For decades many have wondered why unity has been hard to attain among the tribes in this country.

The answer lies in our history. Nigeria was not formed by groups or tribes who saw purpose in unity. Nigeria is as a result of Britain’s commercial interest in West Africa.

Then Nigeria was once known as the slave coast but by 1870 that had changed. Britain had lost its appetite for slaves and preferred palm oil. In the 19th century, Britain was the first industrialized nation in the world and it needed palm oil as a lubricant for its machines.

Here comes Nigeria. The country or what was Nigeria back then had a lot of palm oil, the majority of it tucked in the lush vegetation of the Nigeria Delta which ironically has been polluted by another type of oil.

With the lack of structure in the palm oil business, with Niger-Deltans sold to the highest bidder, Goldie was able to control the region of the Lower Niger River. In 1884 his business had boomed that he had 30 trading points along the Lower Niger essentially creating a monopoly for the Brutish to capitalize on

The Berlin Conference should be highlighted here. The conference gave the British access to the Lower Niger and left very little for the Germans and French. In 1886, George Goldie started moving inwards into River Niger and Benue, a clear violation of the gentleman’s agreement he had made with the chiefs. It was initially agreed that the United African Company would not pass the coastal areas.

Also within the same year, the United African Company was turned to Royal Niger Company. George Goldie’s business operation was far from fair.

They tricked the native chiefs (including Jaja of Opobo) into signing agreements that gave them the exclusive rights to export palm oil after initially agreeing that free trade would not be obstructed. The Chiefs fell for the promise and signed the dubious contracts that were written in English.

When Jaja of Opobo wanted to export his own palm oil, he was accused of obstructing commerce and sent into exile. On his way back home in 1891, he was poisoned with a cup of tea (sounds familiar?).

The story of Jaja of Opobo made chiefs and rulers to be wary of their deals with the Royal Niger Company. Frederick William Koko Mingi VIII of Nembe popularly known as King Koko was one of such rulers.

The born-again monarch who was formerly a school teacher detested the restriction on trading and did business with the Germans directly.

In 1894, after the Royal Niger Company introduced more restrictions, Koko Mingi VIII denounced Christianity and formed an alliance with the Bonny and Okpoma to take down the company.

Unfortunately, the Bonny refused the alliance. This did not stop the rebellion. History has it that Koko Mingi VIII led an attack on the Royal Niger Company headquarters on January 29, 1895. The headquarters was at Akassa in Bayelsa.

The attack saw the king capture, 60 white men, while losing forty of his soldiers. Using the 60 men as hostages King Koko Mingi wanted the RNC to allow him to choose his trade partners. If the company granted his wish, he would release the men.

The Royal Niger Company did not yield. King Koko killed forty of the men he captured. As retaliation, the Britain’s Royal Navy attacked Brass and levelled it completely on February 20, 1895.

An uneasy calm was restored and the British had their way. King Koko was on the run. As punishment, the people of Brass were fined £500. Their weapons were taken from them also.

King Koko moved into exile after rejecting the terms of the British after the British Parliamentary Commission. He committed suicide as an outlaw in 1898.

The war was, however, a bad PR look for the Royal Niger Company. Great Britain revoked its charter in 1899.