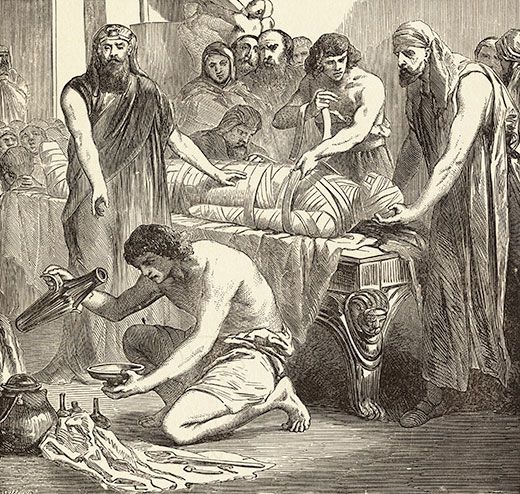 The question was not “Should you eat human flesh?” says one historian, but, “What sort of flesh should you eat?”

The last line of a 17th century poem by John Donne prompted Louise Noble’s quest. “Women,” the line read, are not only “Sweetness and wit,” but “mummy, possessed.”

Sweetness and wit, sure. But mummy? In her search for an explanation, Noble, a lecturer of English at the University of New England in Australia, made a surprising discovery: That word recurs throughout the literature of early modern Europe, from Donne’s “Love’s Alchemy” to Shakespeare’s “Othello” and Edmund Spenser’s “The Faerie Queene,” because mummies and other preserved and fresh human remains were a common ingredient in the medicine of that time. In short: Not long ago, Europeans were cannibals.

Noble’s new book, Medicinal Cannibalism in Early Modern English Literature and Culture, and another by Richard Sugg of England’s University of Durham, Mummies, Cannibals and Vampires: The History of Corpse Medicine from the Renaissance to the Victorians, reveal that for several hundred years, peaking in the 16th and 17th centuries, many Europeans, including royalty, priests and scientists, routinely ingested remedies containing human bones, blood and fat as medicine for everything from headaches to epilepsy. There were few vocal opponents of the practice, even though cannibalism in the newly explored Americas was reviled as a mark of savagery. Mummies were stolen from Egyptian tombs, and skulls were taken from Irish burial sites. Gravediggers robbed and sold body parts.

“The question was not, ‘Should you eat human flesh?’ but, ‘What sort of flesh should you eat?’ ” says Sugg. The answer, at first, was Egyptian mummy, which was crumbled into tinctures to stanch internal bleeding. But other parts of the body soon followed. Skull was one common ingredient, taken in powdered form to cure head ailments. Thomas Willis, a 17th-century pioneer of brain science, brewed a drink for apoplexy, or bleeding, that mingled powdered human skull and chocolate. And King Charles II of England sipped “The King’s Drops,” his personal tincture, containing human skull in alcohol. Even the toupee of moss that grew over a buried skull, called Usnea, became a prized additive, its powder believed to cure nosebleeds and possibly epilepsy. Human fat was used to treat the outside of the body. German doctors, for instance, prescribed bandages soaked in it for wounds, and rubbing fat into the skin was considered a remedy for gout.

Blood was procured as fresh as possible, while it was still thought to contain the vitality of the body. This requirement made it challenging to acquire. The 16th century German-Swiss physician Paracelsus believed blood was good for drinking, and one of his followers even suggested taking blood from a living body. While that doesn’t seem to have been common practice, the poor, who couldn’t always afford the processed compounds sold in apothecaries, could gain the benefits of cannibal medicine by standing by at executions, paying a small amount for a cup of the still-warm blood of the condemned. “The executioner was considered a big healer in Germanic countries,” says Sugg. “He was a social leper with almost magical powers.” For those who preferred their blood cooked, a 1679 recipe from a Franciscan apothecary describes how to make it into marmalade.

Rub fat on an ache, and it might ease your pain. Push powdered moss up your nose, and your nosebleed will stop. If you can afford the King’s Drops, the float of alcohol probably helps you forget you’re depressed—at least temporarily. In other words, these medicines may have been incidentally helpful—even though they worked by magical thinking, one more clumsy search for answers to the question of how to treat ailments at a time when even the circulation of blood was not yet understood.

However, consuming human remains fit with the leading medical theories of the day. “It emerged from homeopathic ideas,” says Noble. “It’s ‘like cures like.’ So you eat ground-up skull for pains in the head.” Or drink blood for diseases of the blood.

Another reason human remains were considered potent was because they were thought to contain the spirit of the body from which they were taken. “Spirit” was considered a very real part of physiology, linking the body and the soul. In this context, blood was especially powerful. “They thought the blood carried the soul, and did so in the form of vaporous spirits,” says Sugg. The freshest blood was considered the most robust. Sometimes the blood of young men was preferred, sometimes, that of virginal young women. By ingesting corpse materials, one gains the strength of the person consumed. Noble quotes Leonardo da Vinci on the matter: “We preserve our life with the death of others. In a dead thing insensate life remains which, when it is reunited with the stomachs of the living, regains sensitive and intellectual life.”

The idea also wasn’t new to the Renaissance, just newly popular. Romans drank the blood of slain gladiators to absorb the vitality of strong young men. Fifteenth-century philosopher Marsilio Ficino suggested drinking blood from the arm of a young person for similar reasons. Many healers in other cultures, including in ancient Mesopotamia and India, believed in the usefulness of human body parts, Noble writes.

Even at corpse medicine’s peak, two groups were demonized for related behaviors that were considered savage and cannibalistic. One was Catholics, whom Protestants condemned for their belief in transubstantiation, that is, that the bread and wine taken during Holy Communion were, through God’s power, changed into the body and blood of Christ. The other group was Native Americans; negative stereotypes about them were justified by the suggestion that these groups practiced cannibalism. “It looks like sheer hypocrisy,” says Beth A. Conklin, a cultural and medical anthropologist at Vanderbilt University who has studied and written about cannibalism in the Americas. People of the time knew that corpse medicine was made from human remains, but through some mental transubstantiation of their own, those consumers refused to see the cannibalistic implications of their own practices.

Conklin finds a distinct difference between European corpse medicine and the New World cannibalism she has studied. “The one thing that we know is that almost all non-Western cannibal practice is deeply social in the sense that the relationship between the eater and the one who is eaten matters,” says Conklin. “In the European process, this was largely erased and made irrelevant. Human beings were reduced to simple biological matter equivalent to any other kind of commodity medicine.”

The hypocrisy was not entirely missed. In Michel de Montaigne’s 16th century essay “On the Cannibals,” for instance, he writes of cannibalism in Brazil as no worse than Europe’s medicinal version, and compares both favorably to the savage massacres of religious wars.

As science strode forward, however, cannibal remedies died out. The practice dwindled in the 18th century, around the time Europeans began regularly using forks for eating and soap for bathing. But Sugg found some late examples of corpse medicine: In 1847, an Englishman was advised to mix the skull of a young woman with treacle (molasses) and feed it to his daughter to cure her epilepsy. (He obtained the compound and administered it, as Sugg writes, but “allegedly without effect.”) A belief that a magical candle made from human fat, called a “thieves candle,” could stupefy and paralyze a person lasted into the 1880s. Mummy was sold as medicine in a German medical catalog at the beginning of the 20th century. And in 1908, a last known attempt was made in Germany to swallow blood at the scaffold.

This is not to say that we have moved on from using one human body to heal another. Blood transfusions, organ transplants and skin grafts are all examples of a modern form of medicine from the body. At their best, these practices are just as rich in poetic possibility as the mummies found in Donne and Shakespeare, as blood and body parts are given freely from one human to another. But Noble points to their darker incarnation, the global black market trade in body parts for transplants. Her book cites news reports on the theft of organs of prisoners executed in China, and, closer to home, of a body-snatching ring in New York City that stole and sold body parts from the dead to medical companies. It’s a disturbing echo of the past. Says Noble, “It’s that idea that once a body is dead you can do what you want with it.”

Maria Dolan is a writer based in Seattle. Her story about Vaux’s swifts and their disappearing chimney habitat appeared on Smithsonian.com in November 2011.