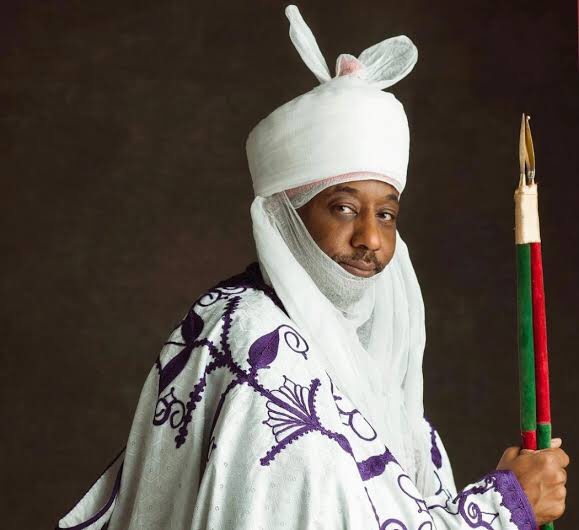 (1) This week, we have been inundated with news about how the Kano State governor Abdullahi Ganduje aka Gandollar has waged war on the Emir of Kano Sanusi Lamido. Gandollar is unhappy about how the emir was opposed to his re-election after the governor was video taped receiving bribes to collect government contracts, so had the monarch probed and now is creating four more emirs in Kano to reduce Sanusi’s influence

(2) No doubt, with the creation of more monarchs in Kano, the power of the emir will wane but alas at what cost. Nigeria currently accounts for about half of the world’s monarchs, which costs their state treasuries dear. This is money that should be spent on education, healthcare, roads, rail, housing, infrastructure, etc

(3) As you can see from this picture, Nigerian schools are underfunded. This is partly because it is local governments that are responsible for maintaining primary schools in Nigeria. However, it is these same local governments that go about building palaces for monarchs. Sadly, the comforts of monarchs takes priority over the education of our children in Nigeria, hence why schools are in this terrible state, yet traditional rulers live in opulent palaces

(4) In pre-colonial Nigeria, we did not have this proliferation of monarchs and it is a fallacy to say they are part of our culture. Most of them were created by the British under indirect rule to collect taxes for the colonial government. Frederick Lugard spelt out the policy in his book Dual Mandate published in 1922

(5) Prior to 1914, we only really needed the Alaafin of Oyo, Obi of Onitsha, Sultan of Sokoto, Obong of Calabar, Shehu of Borno and Oba of Benin. In Malaysia for instance, they have nine kings and they rotate the title of King of Malaysia among themselves. If the British had really wished us well, they would have merged and consolidated these Nigerian monarchies into the above six

(6) However, because the British needed tax collectors and local government administrators they kept crowning more monarchs. Sadly, since independence, we have not reversed the trend and monarchies are sprouting up on a daily basis at exorbitant costs. At some stage, the government needs to stand up and tell Nigerians the truth that we can no longer afford this luxury

(7) As we now have state governors and local government chairman, these monarchs have no functions. They are just figure heads and cultural symbols. What should thus happen is that if any community wants a monarch, they should fund it themselves. Why should oil proceeds meant for socio-economic programmes be used to fund monarchies?

(8) One of my biggest beefs with monarchies is that they take away some of our best brains. Emir Sanusi for instance is a brilliant finance man, who we need running our economy. Likewise, the Owa Obokun of Ijeshaland Oba Adekunle Aromolaran was one of our brightest economists ever. Tying these people down in palaces is a sinful waste of talent. Monarchs are not allowed to engage in politics, take up appointments or head government agencies, so how on earth do we get the benefit of their expertise?

(9) With the growing de-mystification of monarchs as symbolised by the Gandollarisation of Emir Sanusi, maybe our people will start to look towards economic solutions to our problems. Up until now, the ethnic and primordial identity which the monarch symbolises has derailed our thought process. We are so caught up with this religious and ethnic thing that we are too scared to address our real issues. I just hope the kickback king Gandollar sparks a national rethink and his bad belle leads to a radical rethink

(10) What Nigeria needs today are functioning state governments that generate wealth, create jobs, provide infrastructure and improve the quality of life. Holding on to an appendage of the colonial era is a worse crime then clutching on to the unitarist economic model introduced through Aguiyi-Ironsi’s infamous Decree 34 of 1966 that abolished federalism