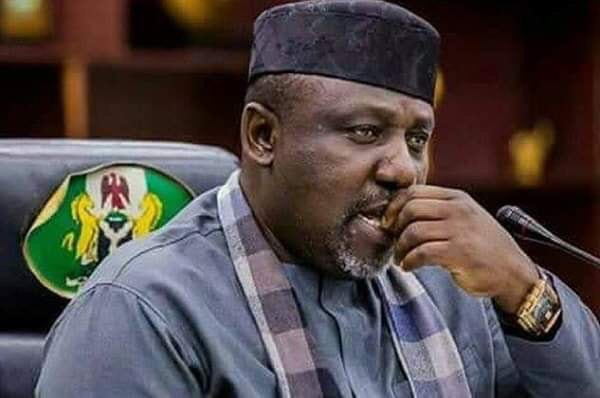 Dear readers, everything that has a beginning must have an end. It is therefore only the prerogative of humans to decipher whether the end is to be termed good or bad. For the past eight years, Gov. Rochas Okorocha has held sway as governor of Imo state and except the rapture trumpet sounds to call an end to this world, nothing will stop the maverick governor of the state, Chief Rochas Okorocha, from being regarded as a former governor after May 29, 2019. The Imo Chief Executive will hand over the reigns of power to the governor elect, Rt Hon. Emeka Ihedioha, thus bringing an end to his 8-year spell in charge of Imo affairs which analysts have often comfortably described as a disaster, even though the Ogboko born politician and several other imolites, especially his supporters, would disagree. But as the governor prepares to bow out, what is/are his greatest fear(s)?

Evidently, Okorocha’s body language is suggestive of a man who is uncertain about his fate by the time he would have lost the constitutional immunity under which he had found refuge upon assumption of office in 2011. This is as the Economic and Financial Crimes Commission, EFCC, is rumoured to be hot in his trail after reportedly prominently placing him on its watchlist, and INEC having insisted on not issuing him a certificate of return to become the senator-elect of Imo West senatorial district, after the returning officer who pronounced the APC governor winner of the said poll confessed to doing so under duress. The governor is not helped by the fact that in Imo, ordinary people and elites alike have continued to make statements to suggest that they would be disappointed in the anti-graft agency should it fail to probe and possibility have their outgoing governor convicted by a court of competent jurisdiction over alleged monumental corruption, abuse of office and financial recklessness. This says a lot of the bitterness, indignation and frustration of a vast majority of the state’s citizens who believe the outgoing governor has done more harm than good to the state and abused their common patrimony.

Perhaps, to give himself a soft landing, the embattled governor is believed to be working so hard to have his way around the powers that be in Abuja again, having few months before the APC governorship primary elections in 2018 fallen out with his party’s (APC) national chairman, Comrade Adams Oshiomole, as well as not really being in the good books of the Presidency unlike he always suggested. It is being trumpeted in some quarter that Gov. Okorocha is ready to do anything to be forgiven like the biblical prodigal son, even if it means doing the things he vowed never to do and ordinarily wouldn’t have thought of doing. Chief among the reasons for this bold-faced move by the self acclaimed “commander of free education”, may be to see if the Abuja forces would influence proceedings in his favour by the time the EFCC probably come knocking at his door.

Again, just as the People’s Democratic Party (PDP) in the state has alleged, there is an indication that the South East post-election peace conference/summit reportedly called and organized by The National Council of Traditional Rulers in the state on Thursday, 2nd May, 2019, was actually masterminded by Gov. Okorocha. There is reason to think that the governor attempted to use the event to make peace with the custodians of our cultural heritage, especially those of Imo State and South East by extension. Imo PDP had considered it nothing but a decoy to put INEC under pressure to issue him certificate of return and/or win the sympathy of South East traditional rulers in the event of his anticipated prosecution by EFCC, when he would probably be in need of credible voices to speak and mount pressure on the agency to possibly spare him. Although the veracity of this claim cannot properly be ascertained, the question as to why Gov. Okorocha would begin now to accord such regard to traditional rulers after spending eight years undermining their traditional stools and desecrating the traditional institutions in the state, still remains.

To further confirm his jitter, some of the numerous abandoned projects, especially road constructions in Owerri, the state capital, are hurriedly receiving attentions. This should be proof enough that Gov. Okorocha was not lacking the funds to deliver those projects, but may have deliberately seized them for reasons we may not know, but which are not far from the fact that the monies may have been diverted. What more could be part of the reasons for this rush by a governor who had eight years in his kitty to start and complete every project initiated in his administration? This is not to say that an ongoing project cannot be delivered after the expiration of his tenure. But this would only be in a case where the contract for such was duly awarded, paid for, and assigned to a registered and reputable construction company. In this instance, it is the contractor who is held responsible for failure to deliver the job. However, as not a few imolites believe ( based on what they can see) that it is Okorocha who by himself appropriates, awards and deploys local contractors to do shoddy jobs in the name of projects, under the supervision of his cronies and without involvement of construction companies, it is possible that the monies initially mapped out for these projects had been siphoned.

Nonetheless, Okorocha would beat his chest and say that he was able to do several projects across the state, even though the quality and relevance of those have often been put to questioning by a host of Imo people, but this he would strive to overlook, especially after the encomiums poured on him by Vice President, Yemi Osinbajo who was in Imo few days ago to commission some of those projects.

Yet, his recent statement as reported by the Punch Newspapers does further expose him to his adversaries. The governor was quoted as saying that he spent 30 billion naira to erect the unequipped and largely uncompleted 27 general hospital buildings across the state, at an average of 1.1 billion naira per building. This, engineers, architects and laymen alike have shuddered over. It is practically impossible to spend such extortionate amount on mere brickwork, roofing sheets and labour, as it is obvious that the state government as of today did not equip any of those hospital structures.

It would be interesting to see how Gov. Okorocha would let himself off the hook positioned around his neck by this latest controversy. Even recently, the EFCC chairman, Ibrahim Magu, came out to say that his agency is investigating Okorocha, while INEC have remained defiant over handing him a certificate of return, even as the matter is now before the court.

Obviously, Okorocha should be worried by the possibility of not making it to the National Assembly as he bows out of office as Imo governor on May, 29, 2019. If this should happen, it would mean that he would be adrift of the business of power with EFCC also investigating him. It is not, of course, a palatable situation for a man who has not hidden his desire to become Nigeria’s President, someday. Okorocha leaves office knowing that he is no longer the hero he was for majority of Imo citizens 8 years ago, and he is also aware he has a lot to do to win back the loyalty and confidence of not just the people of Imo state but also Nigerians in general, as he furthers his political career.

For Gov. Okorocha, May 2019 will come so quick. If he had the powers to turn the hands of the clock, he would definitely buy more time. But for the vast majority of Imo people, it can be today, as they cannot wait to have a taste of a new administration in which Rt. Hon. Emeka Ihedioha will be the Chief protagonist.