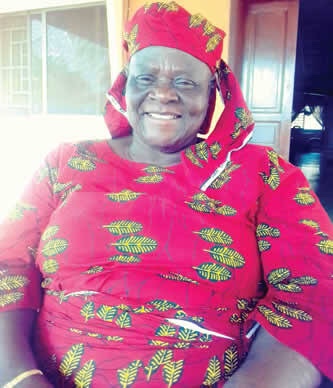 What is now known as”Mammy Market” in all barracks nationwide, came to be as a result of the industry of Mrs Anthony Ochefu. Thanks to an Idoma local brew called “enyi”. Now, nobody remembers to recognise this history maker and accord the honour due to her.

In 1959, Mammy Ode, a young girl from Jericho-Ugboju in the present Otukpo local government area of Benue state was married to Anthony Aboki Ochefu, a young non-commissioned military officer who had just been posted to Enugu from Abeokuta.

They were quartered at the Army Barracks, Abakpa, Enugu. To beat idleness and perhaps earn some money to support her young family, Mrs Mammy Ochefu established a business of selling soft drinks. She also prepared gruel, which is popularly called ‘Umu or enyi’ in Idoma, or kunu in Hausa, for sale to the soldiers in the barrack to help quench their thirst and energise them.

She soon became popular with selling “umu” as soldiers trooped to her house to buy the local brew made from guinea corn. Some of her customers were officers, who always send their batmen to buy the gruel for them, Monday through Friday and even during the weekend when they are not working.

Somehow, one of the non-commissioned officers, the RSM, did not flow with the enthusiasm, which Mammy’s gruel generated among other military men in the barracks. He complained that the stuff was attracting flies into the barracks and ordered Mrs Mammy Ochefu to stop its production and sale.

Though disappointed at the order of the RSM, she stopped the production and sale of “umu” in the barrack. For weeks, Mrs Mammy Ochefu agonized over the fate of her business, just as officers and men of the Nigerian Army who enjoyed her brew because of its freshness and nutritional value lamented over the situation.

From several quarters, pressure mounted on the RSM for a reversal of the order. After a while, he succumbed to and directed that a section of the barrack be reserved for Mrs. Mammy Ochefu to produce and sell her “umu”.

Her joy knew no bound few days after a section of the barracks was allocated to her for the purpose of selling the Idoma local brew within the barrack. She built a small stall for her business and soon, her business began to boom. Most of her customers booked far in advance for the quantity of “umu” they want to buy. Before noon, she would have finished selling the available “umu” for the day.

Soon, other women in the barracks became inspired by her industrious nature and tapped into her industry and started selling other items like burukutu, pito, palm wine, kain-kain and other alcoholic beverages in addition to pepper soup and other delights for the relaxation of the rant and file in the evenings when they close from work and they are permitted to drink alcoholic beverages.

It was not long before that portion of the barracks became known as mammy market. It also became a policy to establish markets inside or near military barracks in the country, initially for the exclusive use of officers and men of the rank and file.

Today, no visit to Abuja, the Federal Capital City, is complete without a taste of fresh fish in one of the mammy markets, especially the one attached to Abacha Barrack. Similar markets attached to paramilitary barracks are also called mammy markets.

After General Yakubu Gowon was overthrown in a military putsch, Anthony Aboki Ochefu, then a Colonel, was posted to East Central state as military governor. So Mrs Mammy Ochefu and her husband returned to Enugu as the first family. As first lady, Mammy Ochefu visits the site where mammy market started about sixteen years earlier.

It must also be stressed too that in retirement, Colonel Anthony Aboki Ochefu and his wife incorporated a company called Mammy Markets, which was into haulage and trading.

Mrs Mammy Ochefu is alive and lives at Otukpo as one of the prized legends of our time.

One thought on “THE ORIGIN OF (MAMMY MARKETS) IN NIGERIAN ARMY BARRACKS.”