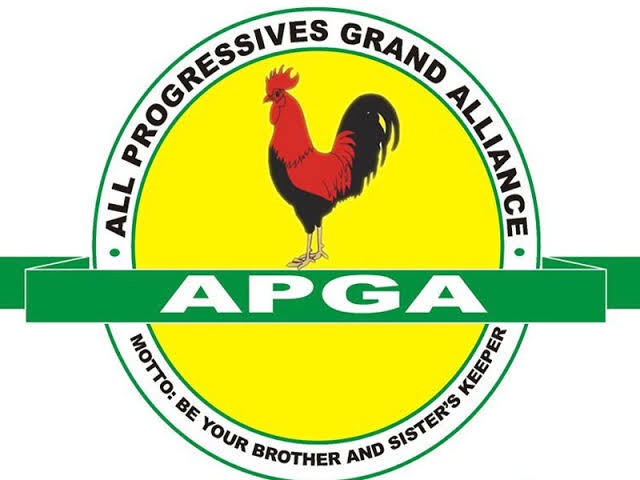 APGA was registered on June 2002 by Chekwas Okorie. On December 2002, Ojukwu joined APGA from APP.

By 2004, Chief Victor Umeh conspired with Ojukwu and Peter Obi and they overthrew chief Chekwas Okorie in a bloodless coup at a hotel in Enugu.

After the coup, chief Maxi Okwu who was the deputy national chairman south, and next to take over in the absence of Chekwas Okorie was deceived by Umeh and Peter Obi to join them against Chekwas.

Maxi Okwu joined and went to court to testify against Chekwas thinking that he would emerge the national chairman of APGA.

But he was used and dumped. Umeh in conspiracy with Ojukwu and Obi announced himself national chairman from the position of Treasurer.

Chekwas Okorie fought APGA up to the Supreme court but lost due to external forces that had interest in APGA.

Umeh became the national chairman of APGA for 13 years. But in 2012, Peter Obi fell out with Umeh. As the then governor on the platform of APGA, Obi went to Maxi Okwu and apologised to him and asked him to return to APGA and help him fight Umeh.

Chief Okwu accepted his apology, abandoned his party, CPP and returned to APGA. On October 2012, with the help of gov Obi, an Enugu state high court removed Umeh and Obi appointed Maxi Okwu the national chairman of APGA on February 2013.

Within two weeks of the judgement, Peter Obi abandoned chief Maxi Okwu and went to ‘kiss’ Umeh in a most stupid reconciliation I have ever seen.

With Umeh and Obi back as national chairman and national leader, the unfortunate idea of making Obiano governor was hatched.

By November 2013, Obiano was never a member of APGA and was in far away Houston taking his gin in a swimming pool became the governor of Anambra state on the platform of APGA.

Just as expected, within 6 months, Umeh conspired with Obiano and chased Peter Obi out of APGA. Obi complained to Bishops and he was told to leave APGA or he will see fire. Quietly, Obi left.

As the celebration of chasing Obi out was about to start, the Aguleri cabal saw Umeh as a threat. The plot to also chase him out began in 2016.

Meanwhile, after Obi abandoned Maxi Okwu, Bianca Ojukwu was coopted into Okwu’s camp to fight both Obi and Umeh. With the help of Dr Chike Obidigbo another battle ensued which eventually ended at the Supreme court in 2016. Before the battle could get to Supreme court, Bianca sold out and returned to Umeh/Obiano camp.

Umeh’s plan was to become the Tinubu of APGA having won many battles but he made the biggest mistake of his political life by allowing a Catholic Bishop to convince him and Obiano to impose a bazaar committee chairman of his parish as the national Chairman of APGA.

The coming of Ozo Victor Oye into APGA became another mistake. Instead of resolving the crisis created by Umeh in his 13 years of holding APGA hostage, Oye turned the party into a money making machine. In order to become rich quickly, than die trying, Umeh became the first victim of Oye.

With the support of Aguleri cabal, Umeh was relegated from 2016-February 2017. And suddenly, a group of NWC members loyal to Umeh in retaliation sacked Oye. And another round of court cases began.

The man who led the rebellion against Oye, Ozo Okpochengene suddenly died after a brief illness. His death did not stop the team that ousted Oye. They quickly gathered momentum and coopted Ochudo Martin Agbaso to lead them.

Ochudo pushed hard and harder, but the same Supreme court denied them the opportunity to stop the APGA bazaar. However, it was believed strongly that Umeh was behind the Okpochengene rebellion against Oye. But true to the culture of betrayals in APGA, Umeh was seen dining and winning with Oye’s camp, while his boys in NWC that staged the coup where expelled from APGA – another betrayal.

With his help, Agbaso was also defeated.

In order to become the Tinubu of APGA, Umeh travelled to Shinkaffi village in Zamfara state and took the title, ‘Jagaban of Shinkaffi.’

But his plans to corner APGA like Tinubu cornered Lagos state couldn’t materialize, as the cabal ambushed him.

Presently, Umeh has been tactically chased out of APGA. Obiano whom he made governor has dumped him.

The betrayal in APGA is going round and round. Oye and his men should not rejoice – the backbiting will soon be their turn.