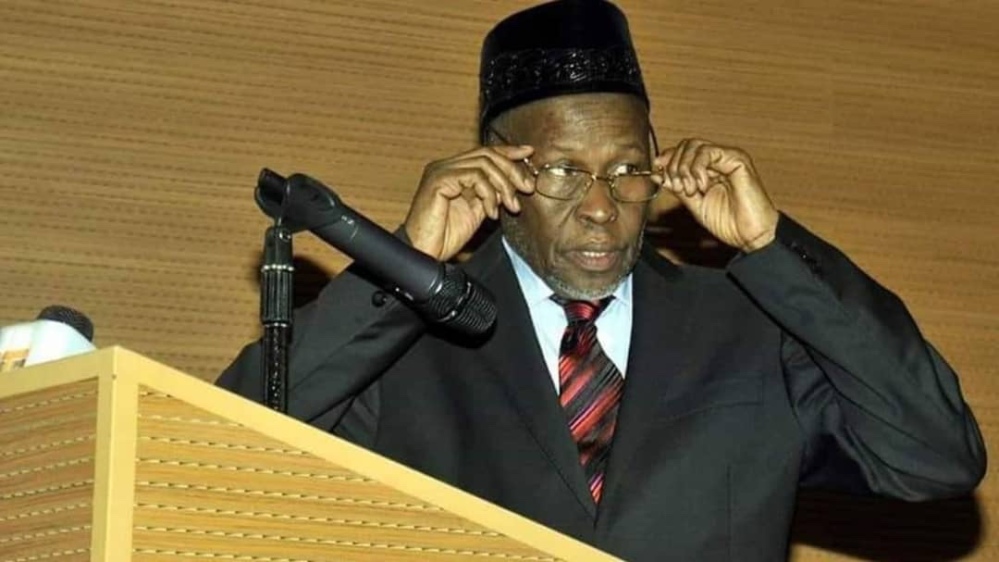 A trending video clip of the senate confirmation hearing of Chief Justice of Nigeria Ibrahim Tanko Muhammad which shows him betraying mortifying ignorance of the meaning of the term “technicality” aggrandizes the point I made in my April 20, 2019 column titled “Atiku’s Citizenship and Buhari’s Illiterate Lawyers” about Buhari’s love affair with incompetence and mediocrity.

I noted that, “The law of attraction says like attracts like, which explains why Muhammadu Buhari is a magnet for mediocrities. Almost all his appointees are, like him, underwhelming, intellectually incurious rubes.” Justice Tanko is the latest instantiation of Buhari’s passion for attracting and elevating people who mirror his own well-known incompetence and witlessness.

First, here is a brief background for people who are not clued in on the exchange that exposed the soft underbelly of the awkward, cringe-worthy ignorance of Nigeria’s Chief Justice. Senate Minority Leader Enyinnaya Abaribe asked Tanko if he thought it made legal and moral sense to pervert the merit of cases before the Supreme Court on the basis of “mere technicality.”

Abaribe reminded Tanko that, “In the 2018 case of Akeredolu vs Abraham, the Supreme Court said, ‘technicality in the administration of justice shuts out justice.’…It is therefore better to have a case heard and determined on its merit than to leave the court with the shield of victory obtained on mere technicality.”

Nevertheless, in spite of the legal precedent the Supreme Court has set regarding the primacy of legal merit of cases over their technicalities in the dispensation of justice, Abaribe pointed out, the Supreme Court this year ruled against PDP’s Ademola Adeleke of Osun State not because his case lacked merit but on the basis of a frivolous technicality.

All this passed over Tanko’s head. He had not the haziest idea what “technicality” meant and went off on a puzzling tangent. “Permit me, distinguished senators, to ask what a technicality is,” he said. “It is something which is technical. By definition, it is something that is not usual and may sometimes defy all the norms known to a normal thing. Now, we have technicalities in our laws and this is because these laws we have inherited were from the British.”

If I didn’t watch the video myself, I would have dismissed the response attributed to Tanko as an ill-willed spoof intentionally designed to diminish his estimation. Although I know that spectacular ignorance and vulgar loyalty are the most crucial criteria to be considered worthy of consideration for appointment in Buhari’s regime, I am still distressed both by the disconcerting know-nothingness Tanko evinced in his response to Abaribe and by the fact that he is head of Nigeria’s judiciary.

Tanko isn’t just any judge; he is the Chief Justice of Nigeria. He didn’t just study law; he has a Ph.D. in law from one of Nigeria’s finest universities— at a time when Nigeria’s education supposedly still had integrity. And facility for and proficiency in language (in Nigeria’s case the English language) and logical disputation are as central to the job of lawyers and judges as farming instruments are to the job of being a farmer.

If Tanko doesn’t know what a “technicality” is, what does he really know? Every averagely educated person knows that in conversational English, a “technicality” is an unimportant detail, a triviality. In law, it means a procedural trifle. This legal sense of the term is now so commonplace that it has diffused to everyday discourse. Why would a judge of nearly 40 years’ standing, a PhD in law, and the head of the nation’s judicial branch of government not know what a technicality is?

But what is even more disquieting is that Tanko inadvertently revealed ignorance of the precedent established by the Supreme Court in which he has served for more than 12 years. Had he read the Supreme Court judgement Abaribe referenced, he would have at least encountered the word “technicality.” He apparently wasn’t, probably still isn’t, aware that the Supreme Court had even laid a precedent that says the Court should not use procedural inanities to subvert the legal merit of cases.

It must be precisely this ignorance that led the Supreme Court to dismiss Ademola Adeleke’s bid to retrieve his stolen mandate from the current governor of Osun State. The Supreme Court didn’t even evaluate Adeleke’s weighty, water-tight case against Oyetola; it ruled against Adeleke just because one of the panelists on the election tribunal that had restored Adeleke’s stolen mandate was absent for one day out of the 180 days the election tribunal tried the petition.

That was a bewildering reversal of the Supreme Court’s own precedent. All over the world, courts rely on precedents to adjudicate current cases. Precedents may be modified, but they are rarely overturned without a compelling reason, certainly not within a few years after they were established. That is what legal scholars call stare decisis, that is, the doctrine that courts should follow precedent. A Chief Justice that is ignorant about something as basic as “technicality” is unlikely to know what “precedent” means, much less something as rarefied as the doctrine of stare decisis.

After the Supreme Court ruled in favor of Oyetola, I wrote on social media that the ruling was judgment, not justice. In spite of suppositions to the contrary, “judgment” and “justice” are not synonymous. Some judgements pervert justice. The Adeleke vs Oyetola case is a classic example of that. Sadly, the distinction between judgement and justice will become starker, bolder, and more invidious now that we have an unbelievably ignorant and incompetent Chief Justice who heads a Supreme Court that’s now an unabashedly “remote controllable” extension of Aso Rock.

Even feeble pretenses to democracy and decency are now dead in Buhari’s Nigeria. Atiku Abubakar’s petition against Buhari’s unexampled electoral fraud has no chance of success in a Supreme Court that overturns its less than one-year-old precedent, that is headed by a nescient and inept chief justice who doesn’t know the meaning of basic terms that are crucial to the administration of justice, and who owes debt to an audacious electoral mandate snatcher for his position.

What is perhaps even more regrettable for me as a northerner is that Tanko has helped to feed the stereotype of the northern know-nothing who owes his rise in society to incestuous northern nepotistic patronage networks. Of course, it’s unfair to hold up Tanko’s obvious cognitive inferiority as representative of all northerners. There are way smarter, more educated northern lawyers than Tanko who nonetheless vegetate on the fringes.

Our problem in the north has always been that we don’t put forward our best eleven, to use the common soccer analogy. We are often led by our worst. And we are all judged by the crass ignorance and indiscretions of our worst who nevertheless become our public face. Buhari is taking the elevation of wretched ignoramuses to important positions to the next level. How utterly sad.