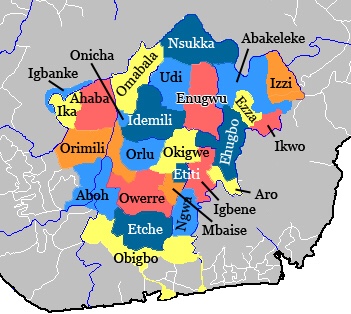 Igbo-Akiri (Igbanke) is an Igbo speaking community of IKA accent in Orhionmwon local government, Edo state. We, the people Igbanke are gradually losing our Igbo linguistic and cultural identity as a result of our forceful membership with the Binis through conquest (Biafran war). If urgent measures are not taken, our linguistic and cultural identity would sooner than later go into sudden extinction. In order to avoid the impending extermination of our race, we therefore, ask that a local government area be created that would consist of Igbo Akiri (Igbanke) and other Ika speaking communities in Edo state. Alternatively, if local government creation is not feasible or possible, Igbo Akiri (Igbanke), should therefore, be severed from Edo state and merged with Ika south local government area in Delta State.

1)Most Igbanke indigenes who have Ika ancestral names like, “Emeka”, “Maduka”, “Chukwuka” “Chinyere”, “Amaka and Ogorchukwu” etc are often confronted with all forms of harrowing experiences when there are needs to visit our council headquarters, Abudu to process one official documents or the other. We are often denied the issuance of documents like, Certificate of Local Government of origin, Protest Letter, To Whom it May Concern, etc on the guise that we are Igbos not Binis.

2) Those who have the likes of the Ika aforementioned names, but can speak Bini language are rarely subjected to the above embarrassments and discriminations. This act goes a long way to vindicate our fear that there is a subtle, but carefully planned agenda to make us lose and abandon our ancestral linguistic and cultural heritage.

3) In order to escape from these unnecessary embarrassments, some have no other option left than to change their identity from Ika to Bini names.

4) Today, we, the good people of Igbanke are gradually losing our once envied linguistic and cultural identity.

5) Some of the eminent sons and daughters of Igbanke, whom out of their outstanding contributions to the development of the community, were recognized and given chieftaincy titles had had such titles changed from their original Ika origin to Bini equivalence. For example, few years ago, one of our sons who addressed himself as “Chief Orike-Eze” in Oba of Benin palace was shamefully harassed, insulted and forcefully forced, right in the palace to change the title to its Bini version. According to the palace, the title, “Orike-Eze” had its origin from Ika and Igbo nations.

5) Most times, when we have cause to attend meetings with the Binis in our local government area or senatorial district, deliberations are often conducted in Bini in language without considering the fact that the people of Igbanke in such meeting neither speak nor understand the language. Often than not, when we attend such meetings, we left the venue more confused than we were before we went.

6) In Edo state, Igbanke is only tolerated, not respected, seen, but not accepted. Today, in Edo state, plans are underway by the state Ministry of Education to introduce the teaching of Bini language in Primary and Secondary schools across Edo south senatorial district including Igbanke. Unfortunately, our indigenous language, Ika is not in any way considered qualified and appropriate to be taught in schools in Igbanke. To us, its another deliberate attempt to send our linguistic identity into extinction.

7) Our people have also suffered several inexplicable discriminations when it comes to political appointments. During the 2013 Edo state local government elections, one of our sons, Mr. Peter Ikem was refused to contest the chairmanship position in Orhionmwon local government area. Reason? His surname, “Ikem” was an Igbo, not Bini name.