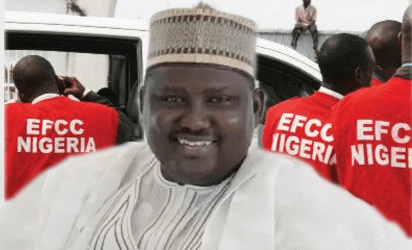 About N17billion pension cash has been traced to the dismissed chairman of the Presidential Task Force on Pension Reforms Task Team, Mr. Abdulrasheed Abdullahi Maina, with a long list of highly-placed beneficiaries.

The said cash was diverted by Maina from the N24billion budgeted by the Federal Government for payment of pension liabilities through the Presidential Pension Reforms Task Team headed by Maina.

While the N2.7billion was converted to personal use through the connivance of banks and family members, N14.374billion was shared by Maina and those in the chain of pension management in different Ministries, Departments and Agencies (MDAs).

Maina and his cohorts dipped their hands into the till under the guise of phantom biometric verification.

Those implicated in the pension funds bazaar in the Pension Task Force Payment Vouchers Include include a former Chairman of the Economic and Financial Crimes Commission (EFCC), A former Acting Chairman of ICPC, a former Inspector-General of Police, two former Heads of Service, Permanent Secretary (State House) and top directors in the civil service, 18 slush companies, some operatives of the EFCC and the National Intelligence Agency (NIA).

Other beneficiaries included some officials of the Independent Corrupt Practices and Other Related Offences Commission (ICPC), bankers, Bureau de Change owners, family members, top officers in the Budget Office and the Office of the Accountant-General of the Federation (OAGF).

The EFCC has so far filed 12 cases against 19 of those implicated, including Maina; a former Head of the Civil Service of the Federation, Mr. Steve Oronsaye; Osarenkhoe Afe; Fredrick Hamilton Global Services Limited and others.

The list of the bigwigs who allegedly benefited from Maina’s benevolence was contained in a report submitted to the Attorney-General of the Federation by the EFCC and the PRTT Payment vouchers for the trial of Maina by the Office of the Director of Public Prosecution (DPP).

According to the document, Maina perpetrated the fraud through the use of the Collective Allowance System; compilation of ghost pensioners; fictitious contracts at inflated prices to both registered and non-registered companies; and fake pension verification trips.

EFCC said: “The use of Collective allowance: Under this fraudulent tactic, which became very handy under Maina and the OHCSF, the Director would approve payment of purported staff of the office to one single individual. After the payment is made, the person whose account was used will withdraw 90% and hand over cash to the Director or whoever was responsible for the payment.

“Key officials of the HoCSF asked their staff and friends to purportedly register companies with the Corporate Affairs Commission (CAC) in which payments were made for contracts that were never executed; some contracts partly executed though grossly inflated and such payments diverted to the suspects.”

Some of the highly-placed public officers were also allegedly allocated estacodes for biometric verification trips without going anywhere.

Some of the fake trips covered foreign shuttles to the United States and the United Kingdom among others.

The wanted ex-PRTT doled out about N23million for a “phantom” trip to the United Kingdom as follows:

Also out of a N36million approved for a “fake” trip to the US by Maina’s PRTT, the following government officials were allocated estacodes:

o The Head of Service and the Permanent Secretary in the OHCSF, who received N3, 286,000 each

o A Director in the office of the Accountant-General of the Federation (N2, 838,000)

The PRTT vouchers confirmed payment of another sum of N40.6 million to some top officials for a shuttle to Atlanta in the United States to screen Nigerian pensioners.

Those who benefited were the following:

The document showed a breakdown of how pension funds were shared to finance pension verification teams to ‘South Africa, ‘Ghana’, and the 36 states’ of the federation, ‘zonal levels’ and others to siphon different sums of public funds into their banks accounts in the name of biometric verification.

Out of the N18.4million released to Maina for a trip to South Africa, the Director -General of Budget was allocated N3,056,000 .

The per diem for the trip to Ghana cost N9.1 million out of which a former Director of Defence Intelligence received N1,388,000 through his First Bank account. Two female staff of EFCC got N1,275,000 each as part of the national cake.

While those who went round the 36 states, allegedly collected N160,471,200 from Maina, a few others were paid N15,477,900 for going round the six geo-political zones of the country

The report gave the details of how Maina allegedly collaborated with former Head of the Civil Service of the Federation, Mr. Steve Oronsaye, and two others in N2billion pension funds allegedly mismanaged for biometric contracts.

The N2billion was part of the looted N17billion cash.

The report added: “Mr. Oronsaye and Maina engaged the services of the following individuals to assist them in looting pension funds.

o Osarenkhoe Afe: (charged to court together with Mr. Maina & Oronsaye): He is an IT consultant who introduced Innovative Solutions to the OHCSF for biometric enrolment project. He stated that, Mr. Steven Oronsaye [former Head of Service) asked him to join the Pension Reform Committee headed by Mr. Abudulrasheed Maina.

o Robert Ikazoboh: (Prosecution witness) He is the CEO of Innovative Solutions & Projects Ltd – a company invited by OHCSF to offer services regarding biometric enrolment exercise. He stated that he was brought in to the project by Osa Afe.

He also stated that Mr. Afe verbally instructed him to work with 2 other companies namely Uptrach and Frederick Hamilton and further instructed him as to the amount to be paid to the companies whenever he received payments.

o Ahmed Mazangari: (Already charged to court): He is the owner of Xangees Technologies Ltd, an information technology consultancy firm and a friend of Maina’s brother, Khalid Biu. He was ‘engaged’ by the OHCSF through Maina based on ‘word of mouth’. He was tasked with the job of computerizing the pension payroll but in the process ironically ended up inserting his own 11 fake pensioners and was used by Maina to receive N153 million for non-existing biometric contract which was withdrawn and handed over to Maina in cash after converting same to dollars through his brother, Khalid. Ahmed, his mother and company are presently standing trial. He stole N230 million as ghost pensioners’ payment from the OHCSF (including the biometric contract).

“During the course of our investigation, the following facts emerged: That Mr. Osarenkhoe Afe (Osa Afe), the owner of Fredrick Hamilton Global Ltd introduced Innovative Solutions to the OHCSF where they were awarded the contract of biometric data capture.

“That from the analysis of Innovative Solution’s bank statement, it was discovered that the total sum of N224.85million was fraudulently paid to them showing an excess payment of 25million against N199 million. Mr. Osa Afe confessed that, the contract sum was inflated at the instance of Mr. Abdulrasheed Maina and the inflated amount delivered to him.

“That Robert Ikazoboh was discovered to have transferred the total sum of N166.5million from his company Innovative Solution’s account to Frederick Hamilton Ltd, a company owned by Osarenkhoe Afe.

“A transfer of N35million was discovered from Innovative Solution to Uptrach Communication Ltd after which Robert Ikazoboh confirmed the payment as amount paid to the company that actually executed the contract of the biometric exercise.

“That Osarenkhoe Afe was also discovered to have been paid the sum of N l19.4 million as biometric enrolment exercise through his company Fredrick Hamilton. Investigation revealed that the company has no contract award letter from OHCSF nor did it carry out any contract.

“That including the amount remitted to Fredrick Hamilton from Innovative Solution, Fredrick Hamilton Ltd was discovered to have been fraudulently credited with the total sum of N 289.05 million out of which Mr. Osarehkhoe Afe confessed to have remitted over N250 million to Mr. Abdulrasheed Maina. Mr. Osa Afe admitted to have benefited N35million only and promised to refund same.

“That one Salami Kareem Adesokan a storekeeper attached to the PRTT confessed that the total sum of N147,765,400.00 fraudulently paid through various banks from OHCSF to three different companies namely Fatidek Ventures, Jolance and Oblando Nigeria Ltd for fictitious Biometric contract were collected cash by him and delivered same to Mr. Maina through one Ann Igwe (Maina’s confidential secretary).

“That the total sum of N153,146,719 fraudulently paid to XangeTechnologies Limited from OHCSF for fictitious Biometric contract was transferred to a Bureau de Change, converted to U.S. dollars and then delivered to Mr. Maina through his relative, one Khalid Ali Biu.”

The report gave the details of how Maina had used some firms, individuals and many accounts to siphon pension funds.

“That analysis of the above listed accounts revealed a total turnover of more than N2.7 billion. It is important to note that 95% of deposits into the fraudulent accounts were cash deposits made by bankers in their own names and other fictitious names.

” Toyin Meseke also bought another sum of $250,000) equivalent of N42,500,000) from one Bashir Mohammed Taura, a bureau de Change operator and instructed him to facilitate the delivery of same money to Abdulrasheed Maina in Dubai U.A.E on 05/06/2014

“That Toyin Meseke facilitated the transfer of the total sum of N33,105,000 to ALNASRA BDC & JIEK BDC on behalf of Abdulrasheed Maina from Cluster Logistics account for the purpose of buying U.S. dollar on 10/03/2014

“That the total sum N26.5 million was paid to the Federal Housing Authority from Kongolo Dynamics Ltd and a balance of N4.4 Million was paid to Alhaji Tijjani Yusuf between 20/10/08 & 19/11/08 for the purpose of buying a property located at No.12, 11th Road Kado Estate Abuja owned by Abdulrasheed Maina.

“That four bank drafts totaling N30 million were issued same day (15/03/2010) in favour of one Titus Adeboye from Kongolo Dynamics Ltd account. Mr. Adeboye confirmed that the fund traced to him was for the purpose of acquiring a property for Mr. Maina (block of shops) located at C2 Ibrahim Taiwo Road, Kaduna.

“That Mr. Abdulrasheed Maina bought another property located at No. l0 Amisi Musa Street, Jabi Abuja FCT from one Alhaji Adamu Modibbo and paid the sum of $2m cash, equivalent of N340 million in June 2012.

“Finally investigation has established that all the accounts are linked to Mr. Maina either through his phone number, email address or transactions between the accounts and testimonies of the account officers/ bankers involved in this complex money laundering scheme.

“A total number of eight GSM lines have been traced by the EFCC as the ones used by Maina to give instructions to banks, cronies and associates to launder the huge amount under investigation.

“Furthermore investigation also confirmed that the source of funds in the accounts could only be from those fictitious contracts and other bogus payments from government, particularly OHCSF Pension Department and CIPPO where Maina superintended at various times between 2008 and 2013, as no known existing and viable business was identified as source of funds into the account and the account officers confirmed same.

“It is also pertinent to note that the Special Audit conducted by the Auditor-General of the Federation also confirmed those violations investigated by the commission.”