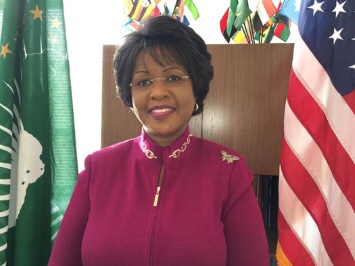 Are you aware that so-called Francophone African countries continue to pay a colonial tax to France? And, this is after independence. This system, according to the recently sacked and outspoken African Union permanent ambassador to the United States Dr. Arikana Chihombori-Quao, is an abomination destined to keep African countries poor forever.

In 1958, Guinea president Sekou Toure opted out of this sham independence, or postcolonial arrangement, more commonly known as neocolonialism. The former colonial masters in Paris became so furious that they ordered the French administrators in Guinea to destroy everything in the country which represented what they called “the benefits from French colonization,” wrote Afrolegends.com. They ransacked the country, destroying any and all institutions that were considered “benefits of colonization.” Schools, administration buildings, nurseries, farming equipment, cars, books and more were destroyed if they could not be shipped back to France, reported afropunk.com.

Fast forward to 2019 and we witness the dismissal of Zimbabwe-born AU Ambassador Dr. Chihombori-Quao, reported The Herald, because she refused to “mince her words on neocolonialism” which included “strong views against Western Europe’s interference in the independence and governance of Africa.”

Former Ghanaian president Jerry Rawlings tweeted: “The dismissal of Arikana Chihombori-Quao, AU Ambassador to the United States, raises serious questions about the independence of the AU. For someone who spoke her mind about the detrimental effects of colonialism and the huge cost of French control in several parts of Africa, this is an act that can be described as coming from French-controlled colonized minds. How can this shameful behavior emanate from us? A woman with all that it takes to galvanize our continent is chopped down by French-colonized power mongers good enough to be cleaners or pruning trees at the Elysee Palace. With leaders of this kind, how can this continent ever progress?” 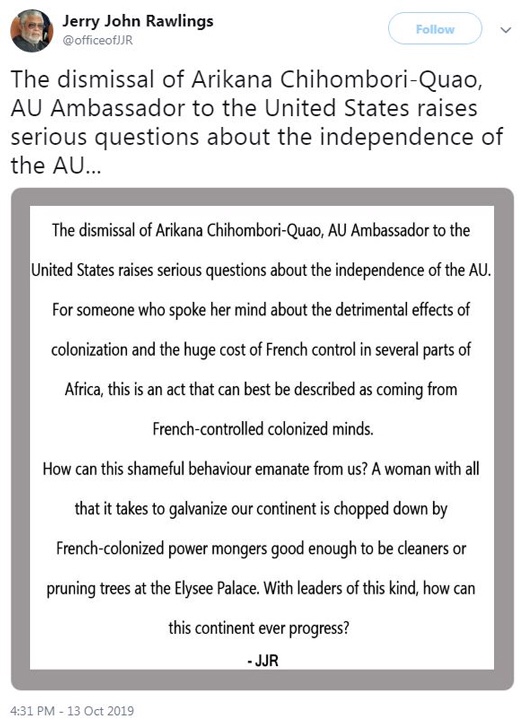 Mr. Rawlings’ reference was to former Chadian Prime Minister and current AU chairperson Moussa Faki Mahamat, who dismissed the ambassador without any kind of explanation

A headline in the Zimbabwe Mail read: “France behind sacking of AU’s ambassador to the United States.” France being the silent partner in Dr. Chihombori-Quao’s fall from grace is the obvious conclusion.

Looking at Chad’s relationship with France makes the dismissal even more ominous. Chad’s main value to France has been its strategic location. It has served as a vital component of France’s defenses in its former African holdings— uranium-rich Niger, oil-producing Gabon and cocoa-growing Ivory Coast, to name a few places. By maintaining a strong military presence in Chad, “France was able to guard the abundant resources of its core from the reach of foreign rivals. In exchange for acting as the region’s security guarantor, France also gained preferential access to its markets,” according to Worldview.Stratfor.com.

Dr. Chihombori-Quao dismissed the use of the terms “Francophone” and “Anglophone.” She said in June, in an HBCU Africa homecoming message designed to connect Black colleges and universities with Africa, that these manufactured terms are the “continuation of colonization in a different form.”

Dr. Chihombori-Quao has traveled the length and breadth of America trying to unite Africa with Africans in the Diaspora. She said so-called Francophone countries’ economics, to this day, are under the control of France.

Under this neocolonial system Africa puts annually $500 billion into the French treasury, which France has used to invest and infuse the French economy with trillions of dollars, Dr. Chihombori-Quao explained. 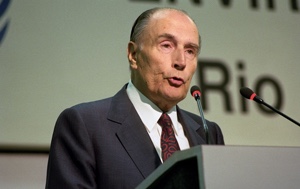 No wonder France’s longest in office president, from 1981 to 1995, Francois Mitterand said in 1957, “Without Africa, France will slide down into the rank of a third (world) power.”

The currency at the “center of a European dispute,” reported the New York Times, is the C.F.A. franc that is used by 14 nations in Western and Central Africa. France is accused of using the currency to exploit former colonies.

Luigi Di Maio, a member of Italy’s populist Five Star movement in January discussed his skepticism about the European Union and French president Emmanuel Macron’s internationalist views. “First (he) lectures us, then continues to finance public debt with the money which he exploits Africa,” said Mr. Di Maio, according to ANSA, an Italian press agency.

Fourteen African countries are obliged by France, through a colonial pact, said Dr. Chihombori-Quao, “to put 85 percent of their foreign reserve into France central bank under the French minister of Finance control.”

And, if you look deeper, of the roughly 68 coups, that have happened in Africa, 61 percent have taken place in so-called Francophone countries. In other words, any African leader wanting to take his country out from under the economic control of France was subject to be overthrown by a French-engineered coup.

A case in point: Togo’s first democratic leader was assassinated by Etienne Gnassingbe, an ex-French Foreign Legionnaire army sergeant who allegedly received a bounty of $612 million. Similar things can be said of coups or political instability in Mali, Burkina Faso, Benin and the Central African Republic. 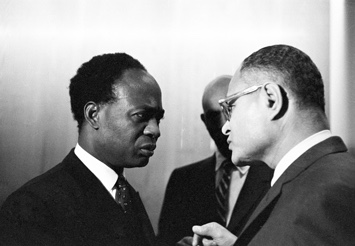 Kwame Nkrumah, a founder of the Organization of African Unity which later became the African Union, warned of outside interference in his book, “Neocolonialism The Last Stage of Imperialism.”

“The essence of neo-colonialism is that the State which is subject to it is, in theory, independent and has all the outward trappings of international sovereignty,” he wrote. “In reality its economic system and thus its political policy is directed from outside.” This is the root message that Dr. Chihombori-Quao relayed.

The African Diaspora Congress, in an online petition, has demanded that the Americantrained medical doctor and activist be reinstated.

“Why was she dismissed, or better, who benefits from her removal? Were African heads of states and governments consulted? Who called the shot? Or is Africa, and peoples of African descent, still facing the debilitating effects of modern colonialism or neocolonialism?” the petition asks.

Just days after receiving her termination letter, Dr. Chihombori-Quao told the NNPA Newswire, “I will continue to speak out on the issues that affect our people, and I will continue to tell that truth.” Her last day as AU ambassador is scheduled for Oct. 31.