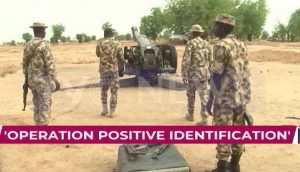 There is a sense in which we cannot successfully fight mega unless we make sense of petty corruption such as extortion. On Friday, I travelled from Yola, Adamawa State to Azare in Bauchi State. About five kilometers after Numan from Yola, there was a military check point set up as part of the Operation Positive Identification, which according to the military brass, is to smoke out criminal road users.

We met a long queue of vehicles, mostly commercial ones, ferrying passengers from and to Yola as we approached it. There was something like a temporary market as passengers from these vehicles have been disembarked and being identified. When asked to positively identify yourself, you are to show your national identity card. When you have it, you are automatically stamped as a law-abiding citizen and asked to go back into your vehicle but still to wait for your follow passengers to be cleared. If you don’t have, you are immediately branded a suspected criminal, possibly a Boko Haram Insurgent. You are asked to step aside. You then have to proof that you are actually not a criminal and this requires you paying an unofficial fine of N1000 to the people who set up the check point. Once you pay, you are automatically cleared and pronounced as law abiding, asked to board your vehicle.

Before I get to the substantive issue of the article, let me address two dangerous assumptions, perhaps deliberately crafted. The first is that criminals cannot and would not have national identification card. This we know is not true, meaning that this operation is hopelessly useless, incapable of apprehending criminals.

The second assumption is the magic done by N1000 to transform a suspected criminal to an innocent law abiding one. Even a Shekau can pay and get this clearance. So, if the first assumption were true, meaning that all a criminal needed is to part with N1000 and is immediately cleared of the suspicion. In this case, again, we cannot apprehend any criminal.

So what is the intention for this wasteful and human degrading operation? Forget about the rationalizations, and puny explanation by the military top brass: stripped it of all these self-serving concern with criminals, it is intended to extort innocent, hapless poor people who are in reality the ones without national identification cards and not some putty Boko Haram Insurgents.

The National Identity Management Commission has not told us that it has completed registering of all eligible Nigerians and that only criminals are not issued with the cards. I live in Kano and each day I pass their office along Gwarzo Road; I see a long que of people waiting to get this magical card. Some would have left their homes as early as 5.30am and were sure to go back home empty handed. I myself had suffered that fate.

Although we have no figure from the NIMC, it is projected that about 50% of Nigerians have not gotten their cards. This translates to about 100 million Nigerians. If all these people cross one of such check points per day, that means about N100 billion would have been extorted from them. But as the N1000 clearance fee is non receipted nor documented, it means that if in your movement you encounter another check point which is common occurrence, you have to pay again. In this way, ordinary Nigerans are daily exhorted of thousands of Naira, in a context in which there is has been increased generalized hardship and poverty in the country. Where do these billions of Naira go? What is done with it? Of course, these are rhetorical questions since we know that the money is shared between the men who are at the check points and their officers in air-conditioned offices in command posts, who daily expect returns from these favored members of the army who are given the privilege of being posted to such a checkpoint.

This is corruption, taking place before our naked eyes. The EFCC knows this is happening but has opted not bring its cameras and army of journalists to arrest and media-try the solders. It is busy arresting yahoo boys, telling us that in the bag, full of economic crimes, it has a scale of which to attend and which to ignore. Extortion has no utility for headlines with which EFCC measure its success.

But even us as anti-corruption activists and crusaders, we tend to close our eyes when this is taking place, preferring to shout at the mega corruption. The damage this does to the anti-corruption effort is that we lose the confidence of the ordinary people who feel, sees and know corruption at the level of daily extortion for which we do not give the slightest attention. We cannot succeed in fighting corruption if we do not make it the fight of the people and we cannot make it the fight of the people if we continue to ignore this type of corruption that has immediate impact on the lives of the ordinary people.

This particular genre extortion has three insidious effects. First, it normalizes corruption in the eyes of both the givers and the takers, and removes its toga of criminality. Second, it criminalizes being poor because, often it is poor people who do not have the national identification card or any identification card for that matter. Third, having criminalized the poor, it then punishes them for an offence that is done by government agencies and their officials. It also derogates the rights to freedom of movement for citizens who no ID cards for no fault of theirs.

Given the silence of the NICM as this happens, how are we sure that it is not in bed with the army to extort the people it has failed to issue cards to? How are we sure that its own top brass do not get their own share of the blood money of the ordinary people? It cannot exonerate itself from this systematic corruption that is built around its mismanagement of the registration of Nigerians.

This brings me to interesting experience I had with this super-efficient agency. After several unsuccessful efforts at getting this illusive card in Kano I gave up. Then in September-October 2016, I traveled to Guadalajara, in Mexico to attend the World Information Technology Summit. Presto, one morning I saw the booth of the NIMC at the Exhibition section of the Summit. We were told we could get registered and there was no queue. It was a leisurely one. We were informed that NIMC had come to Guadalajara, the capital of the state of Jalisco to register Nigerians who were living there. By the time the conference ended, only the few Nigerians delegates were registered and a staff of the Nigerian Embassy Mexico confirmed that there were no Nigerians living in the state of Jalisco, only in Mexico City which was not where they set up their work.

Weeks after we returned, I received a text message, asking me to visit the head office of the NIMC to collect my card. I rushed from Kano to Abuja not miss this golden importunity. At their office I was given VIP treatment and later I found that all those registered outside the county, not just in Mexico. are accorded such privilege! How nice DSA can be. I have been told that they have been visiting many other countries, registering those Nigerian who have no immediate need for the card since their passport is the only identification they need in such an environment. Meanwhile the ordinary Nigerians who need the card are left in the latch.

There is additional issue: the NIMC which for years has not been able to register and issue cards to all Nigerians deliberately set a short expiry date of the cards thus causing more problem for the citizens who are desirous of the cards. Even as I am yet to use my card, last week I received a text message from NIMC which reads: “Dear cardholder, your National eID Card expires on 31-10-2019. On expiration, visit any of our offices for renewal”. I have not cared to visit any of the offices because those who did told me staffers there said they were busy to trying to issue cards to students who are going to write JAMB examination as to have time for card renewal. A part from the short duration for expiry couldn’t the NIMC that is technology driven think of an online renewal system? Or is it that they drive satisfaction from the pains they inflict on citizens spending hours to get the cards? Or is there another form of extortion that I have not been able to understand?

And finally, to underline our adhoc culture and tendency to fire-brigadism, JAMB itself decided to add to the space for extortion by insisting that only candidates who have the national eID will be allowed to sit for its examination. So now suddenly, there is a flood of people needing the illusive cards and desperate parents and guardians are willing to be extorted so that their children and wards do not miss the opportunity to sit for the examination.

How can a responsible government allow this agency to be galivanting across the globe looking for who to register when millions of Nigerians at home are daily disappointed at the seeming impossibility to get something as basic as national registration card. Who in his rational mind has been approving these foreign trips? If these are not corruption, it is because probably now NIMC tags along to the numerous trips of the president, who was sure to meet Nigerians in those countries and therefore provide an assignment for the NIMC to register those patriotic diaspora Nigerians who turn up to receive and welcome their beloved president.

It seems to me that the more trips the NIMC makes, the less Nigerians are registered to obtain the cards and the higher the volume of money the army will exhort. In the end, I think there is a case of collusion between these two bodies to fleece ordinary Nigerians. This is real corruption. Yet it is taking place in a regime that has repeated beyond number its commitment to root out corruption. We understand government wants fight corruption but what I cannot understand is why the same government not only condone these acts of petty corruption but also engineers, creates and sustains the conditions for such corruption to flourish.