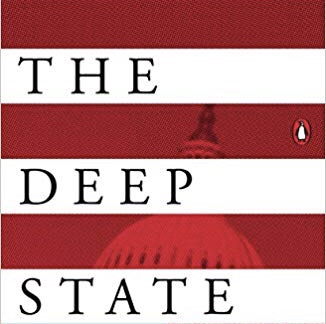 “In the councils of government, we must guard against the acquisition of unwarranted influence, whether sought or unsought, by the military–industrial complex. The potential for the disastrous rise of misplaced power exists and will persist.”

Stephen F. Cohen in his book War with Russia? (released November 27, 2018), claims that “At least one U.S.–Soviet summit seems to have been sabotaged. The third Eisenhower–Khrushchev meeting, scheduled for Paris in 1960, was aborted by the Soviet shoot-down of a US U-2 spy plane sent, some think, by ‘deep state’ foes of detente.”

Mike Lofgren has claimed the military-industrial complex is the private part of the deep state.

However, Marc Ambinder has suggested that a myth about the “deep state” is that it functions as one entity; in reality, he states, “the deep state contains multitudes, and they are often at odds with one another.”

Tufts University professor Michael J. Glennon claimed that President Barack Obama did not succeed in resisting and/or changing what he calls the “double government”; the defense and national security network.

Mike Lofgren felt Obama was pushed into the Afghanistan “surge” in 2009.

Another major campaign promise Obama made was the closure of Guantanamo Bay Prison Camp, which he was unable to accomplish. This has been attributed indirectly to the influence of a deep state.

President Donald Trump’s supporters use the term to refer to allegations that intelligence officers and executive branch officials guide policy through leaking or other internal means.

According to a July 2017 report by the United States Senate Committee on Homeland Security and Governmental Affairs, “the Trump administration was being hit by national security leaks ‘on a nearly daily basis’ and at a far higher rate than its predecessors encountered”.

Trump and Steve Bannon, his former chief strategist, have both made allegations about a deep state which they believe is interfering with the president’s agenda.

In 2018, describing the deep state as an “entrenched bureaucracy”, Trump accused the United States Department of Justice “of being part of the ‘deep state'” in a statement advocating the prosecution of Huma Abedin.

Some Trump allies and right-wing media outlets have alleged that former president Barack Obama is coordinating a deep state resistance to Trump.

While the belief in a deep state is popular among Trump supporters, critics maintain that it has no basis in reality, arguing that the sources of the leaks frustrating the Trump administration lack the organizational depth of deep states in other countries. Critics also warned that use of the term in the U.S. could undermine confidence in vital institutions and be used to justify suppressing dissent.

The Washington Post’s long-time conservative columnist, Charles Krauthammer said of the belief in a Deep State:

I don’t believe in the tooth fairy, the Knights Templar, Bilderberg, the Protocols of the Elders of Zion, a vast right wing conspiracy, or, for that matter, a vast left wing conspiracy. Are there in the U.S. government individual bureaucrats that are Democratic holdovers that would love nothing more than to damage Trump? Yeah, of course there are. Is there a concealed web of conspirators, malevolent permanent hidden shadow government? Rubbish. And I would add that Lee Harvey Oswald acted alone without the help of Ted Cruz’s father.

Rolling Stone magazine, which reported Krauthammer’s comment, summarizes the Deep State concept this way: “Is there actually a deep state? If you mean entrenched bureaucracy, then of course there is. If you mean a government-wide conspiracy, then the answer is almost certainly no.”

Salon magazine traces Donald Trump’s belief in a Deep State to conspiracy theorist Alex Jones of Infowars, who, it says, “believes that the government — aka the “deep state” — has orchestrated attacks and events throughout history. This includes the bombing of the Oklahoma City federal building, the massacre at Sandy Hook (he claims that many of the parents were actors), the Boston Marathon attack, and on and on,” including believing that the 9/11 attack was “executed by the United States government.” The magazine also points to Trump’s long-time ally, Roger Stone, as an influence. Stone has written several books which center on conspiracy theories, and blames Lyndon Johnson for the death of President John F. Kennedy, and that Ted Cruz’s father was involved in that assassination.

In an article for The New York Review of Books, Michael Tomasky quoted Newt Gingrich as using the term in the context of the Robert Mueller investigation in July 2018, quoting Gingrich stating: “[Mueller is] … the tip of the deep state spear aimed at destroying or at a minimum undermining and crippling the Trump presidency”.

Gingrich then added to the statement that: “The brazen redefinition of Mueller’s task tells you how arrogant the deep state is and how confident it is it can get away with anything”.

Professor of international relations at Harvard University, Stephen Walt, has written: “There’s no secret conspiracy or deep state running U.S. foreign policy; to the extent that there is a bipartisan foreign-policy elite, it is hiding in plain sight.”

The term has also been used in comments on the “deep state“-like influence allegedly wielded by career military officers such as H. R. McMaster, John Kelly and James Mattis in the Trump administration. The anthropologist C. August Elliott described this state of affairs as the emergence of a ‘shallow state’: “an America where public servants now function as tugboats guiding the President’s very leaky ship through the shallows and away from a potential shipwreck”.

On September 5, 2018, The New York Times published an anonymous op-ed titled “I Am Part of the Resistance Inside the Trump Administration” written by a “senior official in the Trump Administration”. In the essay, the official was critical of President Trump and claimed “that many of the senior officials in [Trump’s] own administration are working diligently from within to frustrate parts of his agenda and his worst inclinations”.

House Majority Leader Kevin McCarthy described this as evidence of the deep state at work, and David Bossie wrote an op-ed at Fox News claiming this was the deep state “working against the will of the American people”.

However, there was some doubt as to the actual importance of the anonymous author with some estimating hundreds or thousands of possible positions could be considered “senior officials” and the inherent paradox of exposing the existence of such a group.