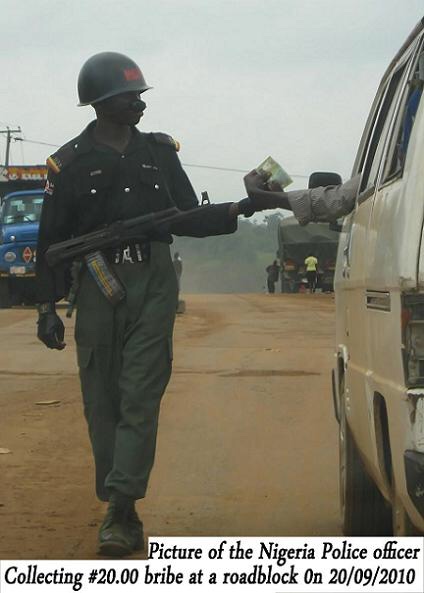 On November 30, 2019, however, Chief Tony Onyima, a respected journalist travelling as a passenger, counted 60 checkpoints on the same tortuous stretch, noting the precise location of each and every roadblock. This means that, on average, there is a “checkpoint” every 6.28 kilometres of the way. It suggests that the notorious stretch boasts more “checkpoints” than Hanoi and Saigon combined ever did all through the 20 years of the Vietnam War.

I lived in the United Kingdom through a third of the three decades of the Northern Ireland Troubles. Not on any single day throughout this period did Armagh or Belfast or Downpatrick or Enniskillen or Londonderry or any of the roads connecting these Northern Ireland cities bear one hundredth of the roadblocks on the Sagamu-Asaba expressway. Strangely enough, there are less than 20 “checkpoints” on the Asaba-Sagamu side of the expressway, demonstrating clearly that the multiple roadblocks on the other side are in praise of Corruption!

Inside Onitsha, the multiplicity of “checkpoints” wears an extortionate hat and blows an ear-tearing whistle. Every day starting from about 3pm, a traffic gridlock is created by bribe-taking soldiers and policemen and women at the Niger Bridgehead. The traffic jam lasts until about 9pm, ensuring that all goods-carrying vehicles, all cars, all busses, all trucks and all trailers are tolled. The tailback runs the span of the quivering 54-year-old bridge that was never designed to bear such deadweight. At the other end, the tailback extends as far as the perimetres of the Premier Breweries. On a daily basis!

You will notice, Mr. President, that in this letter, the word “checkpoint” is always in quotation marks. That is because neither inspection nor clearance takes place at any of the numerous stops imposed on innocent and hapless Nigerians by security men and women under Your Excellency’s watch. Not on one occasion in all my journeys on that highway did I find a policeman or a soldier or a Customs officer or an Immigration officer or an officer of the Civil Defence Corps bothering to inspect the underside of a vehicle. Not once did I ever see any of these “checkpoint” champions lift a bonnet to inspect what is under it. All they do is train assault rifles on innocent and hapless Nigerians, intimidate them, scream commands and bark orders upon their unfortunate heads, speak at them rudely and spitefully, and then stretch out their hands to collect bribes. Once money changes hands, the vehicles are waved on.

This scandalous trend goes on in the full view of everyone at hand, including foreigners. How does it feel, Mr. President, that the military you enlisted in 58 years ago, and which served meritoriously in The Congo and many other troubled parts of the world, is the same force that has men in uniform collecting bribes in broad daylight, in order for their fellow nationals to purchase the freedom to drive on roads built with their taxes? 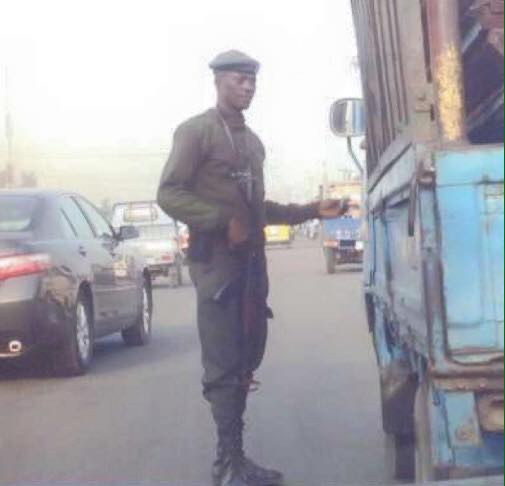 The nature of these “checkpoints” is a cause for serious concern. Barricades are made of tree stumps, tree trunks, logs, sawed timber, debris from dilapidated buildings, disused tyres, sand-filled drums, twisted steel from accidented juggernauts, even planks spiked with nails. When your security personnel abandon any of the “checkpoints”, they do not bother to remove these obstacles, or take with them the debris they painstakingly assembled in the first place. Because the abandoned debris lack luminosity, vehicles plunge into them mostly after nightfall with predictable consequences.

Some of your “checkpoint” operatives never bother to don uniforms, creating the problem of distinguishing between real security personnel and plain criminals and impostors. The only uniformity in their presences is the ubiquitous assault rifle. Some of them appear in sweat shirts, or in T-shirts, or in overcoats in the sweltering heat. Some others have their name tags pinned upside down. Most have no name tags. A good number screen their eyes, bandit-like, behind very dark googles. Others have their felt hats turned front backwards. Occasionally an errant member of the lot is seen straying across the road, wielding a half-full or half-empty bottle of liquid content, or puffing away, regardless.

The cost to the nation of this lamentable aberration is enormous. It could be that the aim is to kill the Nigerian spirit and subjugate the peoples. Still, the unintended consequences of this terrible blight deserve to be stated. Many of the vehicles on the roads are articulated, underscoring their propensity to topple on uneven terrains and cause avoidable destruction and aggravated traffic jams. Many of the vehicles are tankers bearing highly inflammable and combustible liquids and substances liable to ignite at the slightest impact with other vehicles, or because of heatwave, unimaginable developments that could reduce whole kilometres of the freeway to a conflagration, only for such a calamitous result to be sacrilegiously ascribed to “an act of God.”

These “checkpoint” operators on Your Excellency’s watch are under the sun day-in and day-out, collecting “rogers” and pocketing same, unaware that they are pocketing other collateral damages as well. They wear no protective masks over their mouths and noses. Therefore, they inhale in large, dangerous doses carbon monoxide and other toxic agents which could trigger pulmonary conditions that, even if latent in them, could manifest in their offspring as full-blown cases of asthma, bronchitis, cystic fibrosis, emphysema, pneumonia and lung cancer. Some of them court skin cancers, given the sun’s fiery rays on uncovered portions of their skins for at least eight hours every day.

These “checkpoint” personnel are not equipped with ambulances. They have no first aid boxes and, therefore, administer first aid to no one, including themselves. They are not known to offer care to the distressed. They bear no walkie-talkies, and no other forms of radio communication exists between any particular checkpoint and another.

If the enthronement of repression is the aim of these roadblocks, its failure is a fait accompli and it is expected of someone of your knowledge and international exposure to point this out.

If the point is that the Police can only stand on the clay feet of Corruption, there is a sensible alternative in disbanding the disreputable outfit with immediate effect. 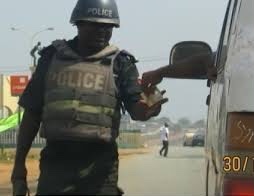 Mr. President, you told Nigeria and you told the whole world that “We have to kill Corruption or Corruption will kill Nigeria.” As a matter of fact, you converted that proposition into a mantra. How, then, can this preposterous multiplication of roadblocks be consolidating itself under your very watch? Why should there be 60 road blocks on the Lagos-Anambra road when, on December 6, 2019, I counted only 16 of them on the 404 kilometre stretch from the border town of Obollo-Afor in Enugu State to Abuja?

There are hardly any reported cases of terrorism in the southern half of Nigeria. Why, then, should each of the three geopolitical zones that make up the south of the country have 200 times more roadblocks than the North East geopolitical zone that is the theatre of Boko Haram terrorism? The distance from Abuja to Gusau, the capital of Zamfara State, is 444.5 kilometres. I haven’t been on the road myself. But commercial drivers that ply the route promise me that there are no more than 15 “checkpoints” on it.

Medecins Sans Frontieres reported on October 15, 2019 that “Criminal groups and extreme violence in the northwestern state of Zamfara, Nigeria, have caused tens of thousands of people to flee their villages and seek shelter in the town of Anka.” On December 7, 2019, The Punch reported that “A fresh attack of gang violence in Zamfara State has left at least 27 people dead,” Despite this mayhem that has continued unabated in Zamfara for many years now, the roads leading into the state are not cluttered by the Corruption of “checkpoints.”

There are other negative consequences of this clearly unsustainable germination and growth of “checkpoints”, this cardinal sin against Nigerians. The power directly behind the “checkpoint” dehumanization of Nigerians is the Aftomat Kalashnikova 1947 – the AK47. It follows that those currently using this deadly weapon to exert overlordship on the rest of society will, after their service years, devise means of privately stockpiling the weapon for the purposes of perpetuating their accumulation of filthy lucre.

Dear Mr. President. Why should the seed of tomorrow’s national instability be continuously sown and watered today under your watch? Why should today’s lesson to those in uniform and under arms be that the dividends of crime are enormous?

How would you feel, Mr. President, to watch video clips of Nigerian soldiers pocketing bribes and casually handing change to those who produce higher denominations of the Nigerian currency than is the standard fare for kickbacks?

The distance between Abuja and your hometown of Daura is 532 kilometres. By road it should be covered in eight hours. How would you take it if your wife and your children did the journey in 18 hours because there are “checkpoints” every five minutes, with your family ordered out of their vehicle at each point, verbally walloped, their vehicle documents “examined” multiple times, and money extorted from them? It is often said that when a commoner’s hearse is on the way to a cemetery, it looks like it is bearing a piece of wood. Nonetheless, it is trite to state that your wife and your children are not more human than my wife and my children. 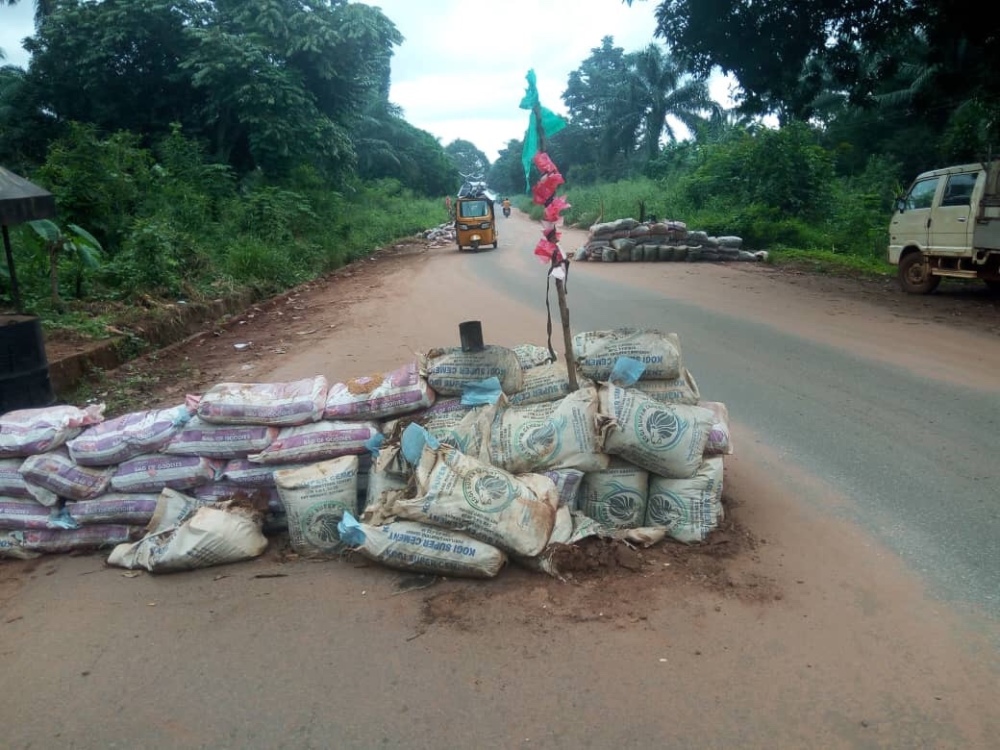 In another week, the mass movement of Ndigbo from all parts of Nigeria to the South East geopolitical zone will commence in earnest. It is an annual pilgrimage for the Christmas and New Year celebrations. Meanwhile, the Akanu Ibiam International Airport in Enugu was shut down in August for “repairs”. Yet, repairs did not commence at the airport months after its ill-conceived and mistimed closure. Air travel would have accounted for at least a sixth of the hundreds of thousands travelling East this month.

With the airport shut, about the only means of travel for South East pilgrims this Christmas is the road where armed men and women under your watch, capricious as ever, are impatiently waiting to administer subhuman treatment to them, such treatment as never happened even in the Transkei at the height of South Africa’s apartheid dispensation.

Ordinarily, it should take about six and a half hours to travel from Lagos to Onitsha. With all the “checkpoints” the journey now takes anything from three to four hours more. Given the hundreds of thousands going to travel from the South West to the South East, it means that most of them, including toddlers, the old, the pregnant and the infirm, will be subjected to close to 18 hours of inhospitable travelling conditions simply because of the desire to be with their loved ones during Yuletide. Why should Nigerian citizens be sentenced to this prejudicial treatment of orchestrated delays, wanton extortion, even incarceration and, in extreme cases, coldblooded murders?

Dear President Muhammadu Buhari. Remember that during the first quarter of 2017, when the Kaduna Airport was shut for runway repairs, special trains fully manned by security personnel were provided that guarded rail travel for Abuja destined travellers compelled to use the Kaduna Airport. The least you can do is to treat all Nigerians with equal consideration. I urge you today to halt this abominable rot and rash of “checkpoints” on our highways. Order an immediate dismantling of these brazen Nests of Corruption. It will be more melodious music in Nigerian ears than any Christmas and New Year’s messages you plan to give.